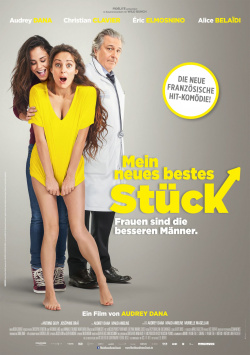 Jeanne (Audrey Dana) is fed up: she is constantly at loggerheads with her ex-husband and now she has also lost sole custody of their two children. She's good at her job, but gets pushed around too much, which is why she's always the scapegoat when she makes mistakes. She realizes that if she had been a man, this wouldn't have happened to her. She soon finds out if this is true, because one morning she suddenly wakes up with an extra body part: a penis! Jeanne is of course shocked and completely confused, which is compounded by uncontrollable hormonal surges. But as she begins to accept her new bestie, it also brings with it a whole lot of new self-confidence. At least until she falls in love with her co-worker (&Eacute;ric Elmosnino), who absolutely cannot know about the little friend between her legs. But how does she get rid of the thing?

Director and lead actress Audrey Dana's directorial debut French Women had already brought not only her film characters but also the audience to the brink of a nervous breakdown. With My New Bestie, she takes that to an even higher level. The idea has potential for a successful comedy that even hides something like a good message behind a few crude jokes here and there. But all that gets completely lost in hysterical screaming, wild gesticulating and extremely flat gags. Dana has managed the feat of making almost every character in this comedy seem unlikable. Only Merlin, played by &Eacute;ric Elmosnino, has a few moments in the second half of the film where you actually like him - even if you can't quite figure out why he's interested in Jeanne.

To be perfectly honest, in the whole mess of silliness and annoying patter, there are actually one or two genuinely funny scenes. But of course, that's not enough to save this work of machination anymore. It's a real pity that a nice idea at its core was implemented in such a shallow and even downright sloppy way towards the end. Because the finale is not only enormously predictable, but also extremely rushed. Logic? No way! There is not even an attempt to explain what happened to Jeanne.

There is really very little positive that can be said about My New Best Play. French comedies often have a great deal of charm, delightfully exaggerated characters, and amusing dialogue. Audrey Dana tries to deliver all of that, but overshoots the mark by a wide margin in almost every second. The result is just flat, extremely annoying and unfortunately not funny at all. And for that there is only one: Unfortunately not worth seeing!

Cinema trailer for the movie "My New Bestie (Frankreich 2017)"
Loading the player ...