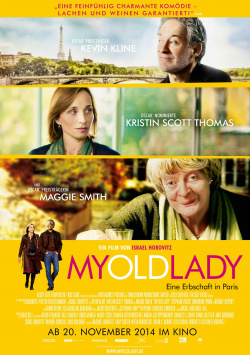 New Yorker Mathias Gold (Kevin Kline) hasn't had much luck in his life so far. When he inherits an apartment in Paris from his late father, the tide seems to turn. With the last of his savings, the loner travels to Paris to turn his new property into cash as quickly as possible. And he could really get a lot of it, since the apartment is worth a small fortune due to its location. But there is a catch: 92-year-old Mathilde (Maggie Smith), who agreed on a so-called real estate annuity with Mathias` father many years ago, still lives in the apartment. This means that she is allowed to live in the apartment until her death and, in addition, receives a monthly pension of 2400 euros. Mathias, who is completely overwhelmed by the French real estate laws, should actually pay her this. But he doesn't even have the money for his return ticket. He has to share the apartment with the sprightly Englishwoman and her feisty daughter Chlo&eacute; (Kristin Scott Thomas), always hoping to get his inheritance.

Award-winning playwright and screenwriter Israel Horovitz delivers his feature directorial debut with this adaptation of his own play, My Old Lady. The theatrical origins of this blend of comedy, drama and romance are evident in the film version. Although Horovitz enriches the story with some picturesque shots of Paris, the whole thing ultimately feels more like a chamber play carried by his dialogue. This fact is not necessarily a negative, but it does give some scenes the actors' acting and dialogue a very artificial feel that takes away some of the film's lightness.

In addition, the mix between comedy and drama only works to an extent. Particularly in the first half hour, the production is bursting with biting wit and amusing exchanges between the endearingly quirky characters. Here, not only the tone but also the pacing makes for a really good mood. But then Horovitz changes both again and again, suddenly becoming very thoughtful and downright dark, dragging out some scenes unnecessarily, only to suddenly pick up speed again and strike up cheerful tones. In some places this works very well, but too often it feels a little indecisive or even oddly out of place.

Fortunately, Horovitz can rely on his three terrific leads. Maggie Smith delivers just another variation on her Downton Abbey/Best Exotic Marigold Hotel character, but again does so in such a wonderful way that you want to watch her do it for hours. When Smith dishes out her snarky tips as the devious Matilda, it's so amusing that you don't even mind her character's high recognition factor for a second. Kevin Kline is perfectly cast as the burnt-out misanthrope. Especially in the interplay with Kristin Scott Thomas Kline is at his best. The play of the three also saves the film over its weaker moments, which is why in the end a thoroughly positive overall impression remains.

My Old Lady is a very charming film that can always put a happy smile on its audience's face. Even if the somewhat uneven staging prevents the comedy from offering more than just good entertainment, the actors alone ensure that the bottom line is a satisfied worth seeing!

Cinema trailer for the movie "My Old Lady (Großbritannien/Frankreich/USA 2014)"
Loading the player ...