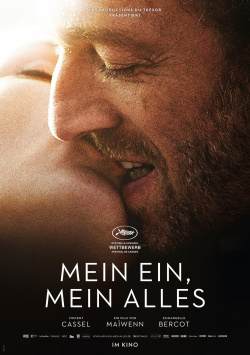 My One, My All

After a serious skiing accident, Tony (Emmanuelle Bercot) must prepare to undergo a lengthy rehab to learn how to walk again. The process of healing her knee is painful and grueling, especially as, helplessly confined to a wheelchair, she is forced to confront her inner demons. And so she reflects on her ten-year relationship with Georgio (Vincent Cassel), her one true love and the father of her son. As passionate as their love was, it also broke Tony's heart more than once and left deep scars. And so the deer becomes an extremely painful affair not only physically but also emotionally, at the end of which, it is hoped, there will be healing.

With the drama Poliezei, about a group of Parisian policemen, actress and filmmaker Ma&iuml;wenn had directed a successful critical and audience favorite. Now she presents another intense drama, My One, My All, in which she explores the destructive power of love. She shows how a passion bordering on dependency turns a firmly established lawyer into a mental wreck and how she tries to free herself from her obsession by coming to terms with this relationship. Ma&iuml;wenn succeeds very well in showing how a relationship marked by happiness and passion turns into a completely broken frenzy of strife, deceit and self-destruction, and how hard it is for Tony to break out of it.

Vincent Cassel plays Georgio as a believable mix of charmer and - if you'll pardon the obvious choice of words - asshole. Like Tony, the audience is torn between strong sympathy and extreme antipathy towards this character. You wish for the strong woman to find the strength to break away from the love of her life, but you can also understand why she can't quite do that. That the film manages to do that is a great feat, which makes it absolutely worth watching, especially for lovers of sophisticated arthouse fare. But at the same time it has to be said that the story, its characters and the sometimes a bit too long-winded production are badly unwieldy and in parts also extremely exhausting.

It's when Tony goes a bit berserk under the influence of too much alcohol at a small party with Georgio's friends or the two of them throw the worst vulgarities at each other on the open street that you realize what kind of broken characters are acting on the screen here. And watching them, how Tony becomes more and more unstable and seems to lose more and more control over their lives because of the constant quarrels, affairs and lies, is truly no pleasure, but an emotional challenge and sometimes also an enormous test of patience. If you can and want to get involved, you will get a very intense relationship drama with very good actors. For all others, this two-hour-long roller coaster ride of emotions could be too much of a strain on the nerves. And then My One, My All can become quite an ordeal, for which you do not necessarily have to pay. Therefore: Only for viewers who appreciate realistic, heavy relationship dramas and intense French actor cinema absolutely worth seeing!