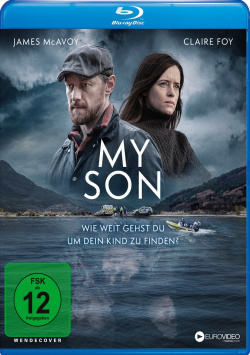 Movie: A long time ago, the marriage of Edmond Murray (James McAvoy) has already broken down, as he was hardly at home due to his profession. To his seven-year-old son, he has far too rarely contact, but still loves the boy with all his heart. When he receives news from his ex-wife Joan (Claire Foy) that his son has disappeared without a trace during a camping trip in the Highlands, Edmond drives to the campsite in desperation. Together with Joan and lead investigator Inspector Roy (Gary Lewis), he joins the search party. But the boy remains missing. After an encounter with Joan's new friend Frank (Tom Cullen), Edmond has a terrible suspicion. But then Roy is suddenly taken off the case...

With "My Son", Christian Carion delivers the English-language remake of his own film "Mon Garcon". As in the French original, he did not give his lead actor a script. James McAvoy had to completely improvise his dialogues and his reactions. This leads to some really strong moments of impressive acting. However, the whole thing is not without its problems. Because in the course of the story there are definitely moments (which could be improvised) that in the end make little sense or are completely irrelevant to the plot.

Director Christian Carion, however, succeeds very well in building up an atmospherically dense, suspenseful mood right from the start. This helps to grip the audience even in the somewhat tough, very slow scenes in the first half of the film. The suspense screw is then tightened more and more, culminating in a truly gripping final act. At the same time, Carion cleverly avoids showing too much, so that most of the action takes place mainly in the minds of his audience.

"My Son" may be rather conventional as a thriller and told in a too carried manner. However, as a cinematic experiment and especially as a testament to James McAvoy's acting skills, the film is a triumph all along the line. So if you want to experience some more sophisticated thriller fare with a special spice, you should definitely not miss "My Son". Absolutely worth seeing!

Picture + Sound: The mystical and beautiful landscape of the Highlands comes on the Blu-ray through the authentic color scheme and the high image sharpness very well. Overall, the picture can capture the special atmosphere of the film well. In the darker scenes, there are minor weaknesses in the detail, but overall, a very positive overall impression remains. This also applies to the DTS-HD Master Audio 5.1 mix, which is very restrained over long stretches and is determined in particular by the dialogues and the atmospheric, discreetly used music. Good!

Extras: Except for the trailer, there are unfortunately no extras.

Conclusion:"My Son" is both a gripping thriller and a very exciting film experiment, which consoles over minor lengths by the strong, completely improvised performance of James McAvoy. Engagingly filmed and magnificently acted, the film manages to captivate until the finale. The audiovisual realization of the Blu-ray can absolutely convince, bonus material, however, is not available. Nevertheless, all in all quite clearly: recommendable!