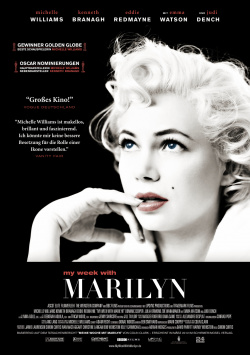 My week with Marilyn

Marilyn Monroe is still so much more than just a legendary actress fifty years after her death. She remains an icon, a myth that art has tried to approach again and again in various forms. Whether books, exhibitions, music or films, it becomes clear time and again that it is almost impossible to decipher or even copy the fascination that Marilyn exerted (and still exerts). Filmmaker Simon Curtis has nevertheless tried, and with My Week With Marilyn he has managed to do exactly what so many before him have failed at. By not making a pure biopic about Marilyn Monroe, but telling a small snapshot of her life through the eyes of a young man who admires her, he succeeded in creating a very special view on the art figure Marilyn Monroe as well as on the person behind the beautiful facade. The fact that the whole thing is also extremely entertaining, humorous and touching is a more than pleasant side effect.

Based on the memoirs of the same name by Colin Clark, My week with Marilyn tells how Colin, then 23 years old, fulfills a great dream in the summer of 1956 and takes a job as an assistant to Sir Laurence Olivier (Kenneth Branagh) on the set of his directorial work The Prince and the Dancer. The whole team waits in suspense for the arrival of the leading lady, Hollywood goddess Marilyn Monroe (Michelle Williams), who also wants to use her stay in England to spend her honeymoon with writer Arthur Miller (Dougray Scott). But soon the diva's behavior causes tension on the set, which increases when Miller travels back to the U.S. and Marilyn feels increasingly lonely and misunderstood. Only Colin, with his open and warm nature, manages to win the trust and affection of the complicated actress. Soon the two spend a lot of time together, whereby not only Colin seems to blossom.

My week with Marilyn is a wonderful film, in which somehow everything seems to be right. The blend of quintessentially British humour, informed by dry dialogue wit, and quietly touching drama is perfectly matched. The set brings the 1950s back to life and the soundtrack, especially the wonderful Marilyn`s Theme by Alexandre Desplat, contributes to the very special warm atmosphere of the film. Finally, there is a truly great ensemble of actors who are just an immense joy to watch. Whether it's Emma Watson, whose small but mighty role is a clear departure from her role of Hermione in the Harry Potter films, Judi Dench, who gives one of the most endearing characters as Dame Sybil Thorndike, or of course the two male leads Eddie Redmayne and Kenneth Branagh - they all make this film a real treat in terms of acting.

The most supporting role and also probably the most important element for the success of the film is Michelle Williams as Marilyn Monroe. At first glance, one might think that Williams bears only a distant resemblance to arguably the greatest sex symbol in film history. But what the actress, who has been nominated for several Oscars, lacks in outward resemblance, she makes up for in her wonderful acting. She scales back the typical Marilyn clichés, confines herself to small nuances in voice (which is lost in the dubbing, however), look and gesture, and in doing so brings the screen goddess back to life. The way Williams embodies the two completely different sides of Marilyn Monroe in front of and behind the camera is just great and makes it understandable why almost the whole world, but especially the people in her immediate surroundings were at the feet of the woman and at the same time driven mad by her.

As a look at the making of a classic film, a tribute to an immortal actress, a romance with humorous and dramatic overtones, or just a pure feel-good movie, My week with Marilyn works in every way. If you like sophisticated British entertainment cinema, are interested in the film industry of the 1950s or simply want to be entertained by great actors, you should definitely not miss this work. Absolutely recommended!

Cinema trailer for the movie "My week with Marilyn (Großbritannien/USA 2011)"
Loading the player ...