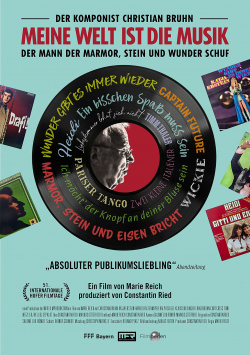 My world is music - The composer Christian Bruhn

What do Heidi, Roberto Blanco, Captain Future, Katja Ebstein and Wicki have in common? They were all made musically immortal by one man. We are talking about Christian Bruhn, the composer of numerous hit evergreens as well as film and television melodies. Marie Reich has now created a cinematic monument to the man who composed such diverse pieces as Marmor, Stein und Eisen bricht, Wunder gibt es immer wieder, Heidi and the soundtrack to the animated series Captain Future, which has become a cult hit. The documentary Meine Welt ist die Musik looks back on an eventful life and takes a closer look at some key works from Bruhn's oeuvre.

Thereby not only companions like his ex-wives Katja Ebstein or Erika Bruhn (Gitti & Erika, Lady Lily) or colleagues like Ralph Siegel and Harold Faltermeyer have their say, but also the master himself. He opens his private archive for the film and lets the viewers participate in his life and work in pleasantly open interviews. For me, who grew up with the animated series and Christmas multiples for which Bruhn wrote the music, the film is of course also a nostalgic trip through childhood and youth. But this wonderful documentary is so much more.

It allows a fascinating insight into the work of an artist who has perfected the "art of simplicity" over many decades, leaving a lasting mark on the German music and television landscape. In contrast to many colleagues such as Ralph Siegel or, in the more recent past, Dieter Bohlen, Christian Bruhn has hardly ever put himself in the spotlight as a person. Very few people would recognise him on the street - his music, on the other hand, is actually known by everyone! And despite this success, Bruhn has always kept his feet on the ground, as this documentary nicely shows. Sure, there were women's stories and wild parties. But first and foremost there was and still is one thing for Bruhn: the music!

Meine Welt ist die Musik is a great music documentary, a piece of cultural contemporary history and the stirring portrait of a really interesting artist, about whom not so much is known yet. For this film there is therefore also quite clearly one: Absolutely worth seeing!

Cinema trailer for the movie "My world is music - The composer Christian Bruhn (Deutschland 2017)"
Loading the player ...