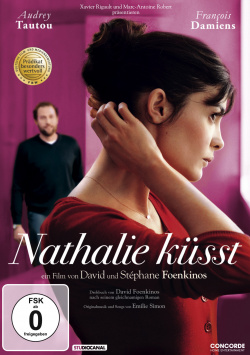 Movie: It is the beginning of a very great love: when Nathalie (Audrey Tautou) and Francois (Pio Marmaï) meet for the first time, they quickly realize that they have found the partner for life. Soon they get married and nothing stands in the way of a happy future. But then Francois dies in a traffic accident and Nathalie's world is completely shattered from one moment to the next. In order not to have to face her grief, the young widow throws herself into her work, but emotionally seals herself off completely from her environment. She vehemently blocks the advances of her boss Charles (Bruno Todeschini). Nathalie is all the more surprised at herself when one day, out of the blue, she falls around the neck of her completely inconspicuous co-worker Markus (Francois Damiens) and kisses him. While the shy Swede falls head over heels in love with his superior, Natalie tries to forget the incident as best she can. But that proves to be harder than expected.

Nathalie Kisses is the film adaptation of David Foenkino's most successful novel to date. The adaptation was done by the author himself together with his brother Stéphane. The result is a beautiful love film, which begins incredibly sad, but then turns into real feel-good cinema with many magical moments. So the viewer can sob unrestrainedly, laugh heartily and pine dreamily at the same time.

The wonderful dialogues, which lie somewhere between comedy and poetry, the harmonious music by Emilie Simon and not least the actors are important ingredients that are responsible for the success of the film. If you think at the beginning that Audrey Tautou is just another variation of her Amelie, her performance quickly becomes much more multifaceted. And although Nathalie's behavior towards Markus doesn't always make her seem one hundred percent sympathetic, she never loses the audience's affection. One wishes for her to be happy again after the death of her husband - and Markus just seems to be the right man for that. Francois Damiens (Nothing to Declare) plays the unassuming Swede in such an incredibly sympathetic and endearing way that you almost get angry when Nathalie's friends claim she deserves better than him. The chemistry between the two is so perfect that you never once wonder why a woman like Nathalie would fall in love with this not necessarily handsome man.

When you see how the world looks to Mark after he's been kissed, or when he watches the life of the love of his life flash before him in Nathalie's grandmother's garden, it becomes clear why Nathalie Kisses is different from most other romantic comedies. It's little moments, short sentences or loving details that fill the film with so much charm and love. And as a viewer, you just can't escape that. So if you like it romantic and French cinema of the original and emotional kind, you shouldn't miss this charming comedy. Absolutely worth seeing!

Picture + Sound: Since only a data-reduced press sample was available for the test, no rating can be given here about the picture quality. The sound available in Dolby Digital 5.1 and DTS, however, could already be tested. As is to be expected in this genre, the quiet sounds dominate the action. Dialogues and music are in the foreground, only smaller sound effects and ambient noises provide a little movement in the surround channels. Good.

Extras: The DVD offers a handful of extras worth watching. Starting off with a few more or less amusing outtakes (10 mins), as well as more than ten dropped scenes with a total running time of 22 minutes. These scenes, besides a very nice moment between Nathalie and Francois, are primarily deepenings of secondary characters like Natalie's boss and her assistant.

Continues with a Making of (approx. 24 min.) worth watching, which captures the making of selected scenes while offering some brief interviews with those involved on set. A short promotional interview with Audrey Tautou (approx. 3 min.), the trailer for the film, and other programming tips from the provider round out the tidy bonus package.

Conclusion: Nathalie Kisses is a very charming and original romantic comedy from France that warms the hearts of lovers of the genre with plenty of humor, a little poetry and some very emotional moments. The DVD has some extras worth watching in addition to the lovely main film, which makes purchasing the disc absolutely recommended!