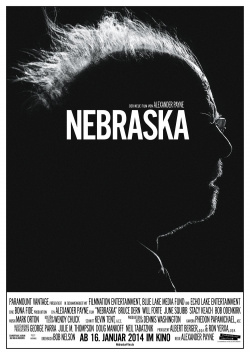 Woody Grant (Bruce Dern) has probably had the best days of his life. Neither body nor mind wants to go the way Woody would like - and that doesn't exactly make the old gentleman a pleasant contemporary. When he's misled by an advertising prospectus and convinced that a million-dollar prize awaits him in Lincoln, Nebraska, the stubborn old man is determined to make the 900-mile journey. But since he can't do it alone and just won't give it a rest, his son David (Will Forte) has to step up. Reluctantly, he allows himself to be persuaded to drive his father, with whom he hardly has anything to do anymore, to Lincoln. The fact that they also have to stop in Woody's hometown Hawthorne on the way and visit the unloved relatives doesn't make this road trip any more pleasant. And when Woody starts telling everyone about his supposed winnings, which brings the envious onto the scene, the road to Nebraska threatens to turn into a catastrophe. But as is so often the case, life has many a surprise in store for the Grant family.

With Nebraska, Alexander Payne pulls off a bit of a feat. For one thing, he stays true to his narrative style. Many moments remind of About Schmidt, but also references to The Descendants or Sideways are recognizable. Especially in terms of character drawing and restrained, yet somewhat wry humor, Payne has an unmistakable signature that comes through again here. At the same time, he completely changes his visual style. While the images he drew of the country and its people were always rather uncharacteristically realistic by Hollywood standards, a very colorful beauty always prevailed. The Descendants in particular lived not only on the story and characters, but also on the Hawaiian landscape. Now, in Nebraska, Payne strips his images of all color and submerges them in a fascinating drabness that is also reflected in the story.

For although this very quiet family story is repeatedly infused with Payne's typical humor and has quite a few quite wonderful laughs to offer, the story is overall permeated by a deep melancholy and a certain sadness, which is further intensified by the fact that some scenes are simply almost too close to real life. As a result, the film manages to be simultaneously wonderful and amusing, as well as melancholy and a little depressing. It is undoubtedly Payne's most unadapted work to date, which proves to be extremely brave considering the huge commercial as well as artistic success of The Descendants. To follow up a critics' and audiences' darling for the masses (Payne's most successful film to date, with a worldwide box office of nearly $200 million), which won an Oscar and numerous other awards, with a much bulkier, almost minimalist black-and-white film is anything but ordinary.

However, this is again typical of Alexander Payne. He always wants to tell his rather intimate stories in the most appropriate way, without having to meet the expectations of the audience or the specifications of the studios. And for the story of Nebraska, there simply would have been no better way than to present it in this somewhat quirky, stripped-back tragicomic way.

Again, Payne has shown a very good hand in his choice of actors. While Bruce Dern (sporting an even wilder mane than Jack Nicholson's in About Schmidt) understandably gets the most attention for his portrayal of the cranky drunk, it's the casting of his two movie sons that is the real surprise of the film. For both Will Forte, once a member of Saturday Night Live's comedy troupe and with minor exceptions actually subscribing to rather silly comedy roles, and Bob Odenkirk (Breaking Bad) move here on terrain that requires Forte in particular to play a very different game than usual. And both of them master this quite brilliantly. But also the other actors, whether old star Stacey Keach or a wonderfully grumpy June Squibb, leave a consistently positive impression.

Who expects light comedy fare in Nebraska, will probably be disappointed in the end. That's because there are always moments in the film that are very melancholy, even a little exhausting at times. But for those who appreciate poetic arthouse fare with a rather special humor all its own, this is a wonderful cinematic experience of a more unusual kind. Worth seeing