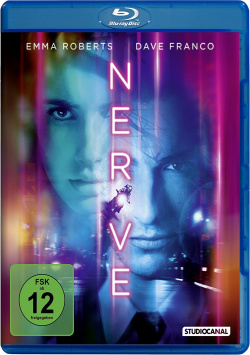 Film: A new game has made its way from Darknet to the smartphones of thousands of users. The game is called "Nerve" and offers its users the possibility to be either only "Watcher" or to secure themselves as "Player" the chance of money and fame within the online community. For this, some increasingly risky tests of courage have to be taken. Sounds pretty simple, actually. And so the shy Vee (Emma Roberts) is persuaded by her friend Sydney (Emily Meade) to register as a "player" for the illegal game. At her first test of courage, she meets Ian (Dave Franco), another "player" who is assigned to her as a game partner. Together, the two of them master one test of courage after the other and become the new heroes of the game. But this night has some unpleasant surprises in store when Vee realizes that you can't just get out of this game…

"Nerve", the adaptation of Jeanne Ryan's successful novel "Das Spiel ist aus, wenn wir es sagen" (The game is over when we say it), not only starts off extremely interestingly in terms of content. The directors Henry Joost and Ariel Schulman ("Paranormal Activity 3 + 4") have also come up with some interesting ways to transport smartphone content to the screen for the visual realization of their thriller. The beginning is fresh, exciting and extremely entertaining. If you also consider the hype "Pokemon Go" has recently triggered, the idea of such a game, which attracts more and more users and could turn the successful participants into real stars, does not seem so far-fetched. So the story soon stands on solid legs. And still the makers manage to bring them to the end, to bring them to a complete buckling.

Sometime Vee realizes that "Nerve" is not pure fun, but a really dangerous game, whose creators she has completely surrendered through the completely inconsiderate handling of social networks. In itself another exciting part of a story that is really good in its core. But in order for all this to work and perhaps lead to a kind of critical reflection among the young viewers about the display of their private lives on Instagram, Facebook, Snapchat and Co., it would have required a very consistent continuation of the story from this point. But that's not exactly what happens.

Without revealing too much, it should be said that the finale was so softly washed out to lead to a politically correct happy end that it seems almost involuntarily funny. What at the beginning still seems relatively credible, degenerates at the end to an absolutely absurd laughing stock. Certainly, one might wish that a small hack would be enough to give back their morals to people who feel protected by the anonymity of the Internet. But even if one were to assume that this would be the case, it would certainly not happen as it did in this more than disappointing final. Unfortunately, the fact that you try to row back a little in the last shot doesn't help anymore.

Here a lot of good potential was given away in order not to overwhelm the young target audience with something like a complex story that forces active thinking and critical reflection. That's not just a pity, it's really annoying. Because it's not just that a movie that is good over long stretches of time is so qualitatively completely degraded at the end. Moreover, the movie would have had what it takes to lead to discussions, which are finally nipped in the bud by the "in the end everything will be fine" ending. And that's only enough for one: Still worth seeing with some cutbacks!

Picture + sound: The visual implementation of the film for the Blu-ray leaves an all-round positive impression. The colours are powerful, the contrasts harmonious and the sharpness of the images is also on a good to very good level in the many darker scenes. The sound is determined by the powerful soundtrack, but also makes the dialogues easy to understand and some sound effects sound dynamic from the speakers. As a spectator you can be more than satisfied with that.

Extras: The bonus material is divided into two categories. Under "Watcher" you will find a worth seeing documentary about the making of the film (ca. 25:09 min.), a German promo-making of (ca. 4:03 min.), some outtakes (ca. 2:46 min.), as well as a feature from the New York music festival Governor's Ball, where some of the visitors played the game "Nerve" (ca. 2:44 min.). Under the point "Player" there are two interactive features. The first is of course a somewhat weakened version of the game. The second feature is a test if you are a watcher or a player. Two really nice extras for the target group.

Fazit: "Nerve" begins promisingly with a good story and a visually gripping implementation. Unfortunately, the potential built up here is (almost) completely wasted at the end, which leaves a bland aftertaste. All in all, however, the novel is an exciting and entertaining film for its young target group. On Blu-ray the film presents itself in good picture and sound quality and also has some good extras on board. That's enough, despite the disappointing end, for a clear: Recommendable!