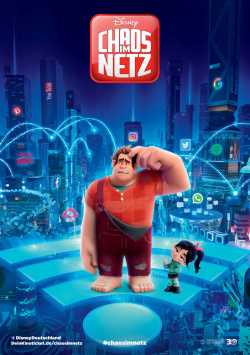 Chaos on the Net

Ralph is back! He and his new best friend Vanellope enjoy spending their days playing video games at old Mr. Litwak's arcade, then meeting up with other video game characters once the arcade closes. But Vanellope wants a little variety in her game of Sugar Rush - a wish Ralph is only too happy to grant her. But as well-intentioned as the hulking video hero is, his actions have far-reaching consequences: The game's steering wheel breaks and can't be replaced. Now Sugar Rush and with it Vanellope are in danger of disappearing forever. Unless the two of them manage to get a replacement. Such a steering wheel is offered for sale on Ebay, but to get their hands on it Ralph and Vanellope have to venture into the shallows of the internet. The action not only quickly becomes a dangerous adventure, but also an unexpected test for the friendship of the two.

Chaos on the Net is the sequel to the Disney hit Ralph reichts. It's the first theatrical sequel for Disney since Fantasia in 2000, as the studio usually releases more cheaply produced sequels to its hits directly for the home theater market. But not so with Ralph and his video game friends. Not only do they get to compete a second time, but they also get to conquer the internet in the process. Of course, this gave the creators plenty of opportunity to let off steam creatively. The game's use of well-known Internet brands makes for some good laughs, with the visit to Ebay being particularly funny. Also the way in which it is made fun of here, with which one can become famous and rich in the net, is clever as well as funny.

But Chaos in the net is particularly successful when Disney is allowed to show itself from its self-deprecating side. When Vanellope hangs out with the Disney princesses or the friends have to flee from the stormtroopers from STAR WARS, it's not only amusing but also delightfully subversive. And so, especially in the first hour, the film manages to be even better, cleverer and more imaginative than its predecessor. But unfortunately, it doesn't stop there.

Because for the final act, the makers had the terrific idea of having Ralph descend into the Darknet. This, of course, has consequences that are not only a bit too scary for small viewers, but also lack any form of charm. The finale is just - in keeping with the title - chaotic, over the top and far too dark. It's a shame, because after the successful opening and the really original way in which the Internet is shown here as a world of its own, the animated film feels a bit uninspired in the last twenty minutes and also visually boring, especially because of the rampant action.

So Chaos on the Net is a sequel that is at the same time better, but also worse than its predecessor. It's quite a feat, after all. Definitely not suitable for children under 6. But then the fun is still absolutely worth watching for fans of part 1, if you manage to fade out the last act. But luckily there are enough successful moments, wonderful ideas and good laughs to make up for this shortcoming!