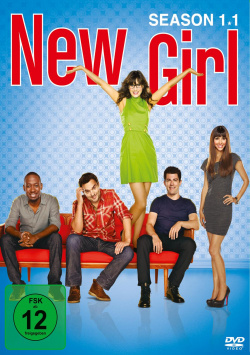 Content: Young teacher Jessica Jess Day (Zooey Deschanel) is desperate. Just when she's trying to get some new momentum going in her relationship with her longtime boyfriend Spence, she catches him in bed with another woman. So it's no wonder that Jess has to find a new place to stay as soon as possible. She ends up in the bachelor flat of Nick (Jake Johnson), Schmidt (Max Greenfield) and Winston (Lamorne Morris), whose already chaotic lives she messes up even more with her very special way. Whether it's the self-absorbed Schmidt's hormones going crazy every time Jess` best friend, model CeCe (Hannah Simone) comes to visit, Nick getting caught by Jess dancing naked, Winston turning into a chime tyrant, or Thanksgiving dinner with Jess` new crush Paul (Justin Long) ending in disaster, everyday life in the shared apartment is far from any form of normalcy after Jess moves in...

New Girl is undoubtedly one of the most charming comedy series of recent years. The sometimes wonderfully quirky humour and the quirky but extremely likeable characters clearly set the series apart from the mass of similarly structured sitcoms. The series, of course, thrives primarily on lead actress Zooey Deschanel. As the daughter of multiple Oscar-nominated cinematographer Caleb Deschanel and actress Mary Jo Deschanel (Twin Peaks) and sister of Bones star Emily Deschanel, the actress and singer was practically born with talent. Especially in smaller productions like the drama Winter Passing or the great (500) Days of Summer she could inspire with her slightly quirky, yet incredibly likeable and charming manner, while her talent was mostly completely wasted in more commercial Hollywood flicks like The Happening. For a long time, it seemed that Deschanel wouldn't be able to show a wider audience what she was made of. Until the series New Girl was written for her.

The series' humor is a perfect fit for Deschanel, who also gets to show off her musical talents here as the performer of the title song (fans should definitely listen to the CDs she recorded as part of the duo SHE & HIM!). But even if the leading lady fits the concept perfectly, a series can only really work well if the rest of the ensemble is also right. And that is absolutely the case with New Girl. Series creator Elizabeth Meriwether has succeeded in creating characters that are all completely likeable, despite their obvious flaws and often very ego-centric behavior. Because even if it comes in the WG again and again to very amusing for the viewer quarrels, the clique, when it comes down to it, sticks firmly together. A joint interpretation of (I`ve had) The Time of my life from Dirty Dancing in a fancy restaurant, solidary headgear during a confrontation with Spence or the joint duck dance to Groovy Kind of Love at a very painful wedding celebration for Nick are just a few of the endearing examples.

Sure, not every gag fits, especially at the beginning the series needs something to find its own tone and seems at times a bit strained. Some scenes border on mild hysteria, which is just too much of a good thing. But fortunately, such weaknesses are in short supply in the first 12 episodes of the first season. The good laughs, the wonderfully quirky moments and the likeable wordplay clearly have the upper hand here. Even if the whole thing is not as mass-compatible as other ensemble comedies a la How I Met Your Mother or The Big Bang Theory, it is to be wished that with the DVD release even more people succumb to the charm of Jess and her flatmates and the series finally receives the success it deserves in Germany. For lovers of a little weirder US comedy: absolutely worth seeing! Part 2 of the first season can actually not come soon enough!

Picture + Sound: The technical implementation of the first twelve episodes of the first season is on a good level for a current comedy series. The image is very clean, the colors vibrant and the overall sharpness satisfactory. Some weaknesses become apparent in the detail presentation, but these remain within negligible limits. The Dolby Digital 5.1 mix on the DVD allows the amusing dialogue to ring out powerfully from the home theater speakers, with the frontal area especially challenged. The English soundtrack sounds a little more harmonious and, despite the successful dubbing, is preferable anyway, as many puns and dialogue simply work much better in the original. For the evaluation of the technical implementation, this is of course not relevant. Picture and sound receive an overall appropriate for TV series: Good!

Extras: To the pilot episode Dirty Dancing on the first DVD there is an audio commentary by the executive producers of the series, Liz Meriwether, Jake Kasdan, Katherine Pope, Brett Bear and David Finkel. It's a good humouredly voiced commentary, but overall rather technical and informative. Then on the second disc, the four main actors have a commentary on the episode Bad in Bed. Here the information content is clearly lower than in the producer's commentary, but the entertainment value is incomparably higher. Both commentaries, like all the other extras, come with optional German subtitles.

Both discs also have a few video extras to offer. On DVD 1 there is a short documentary on the work of the costume designers (approx. 8 min.), who put together the sometimes somewhat extravagant outfits of Jess with a lot of originality. In addition, there are almost 8 minutes of deleted or extended scenes, among which there are some extremely amusing moments to discover.

The second DVD then has casting footage of actor Lamorne Morris (approx. 5 min.), who only joined the cast from the second episode onwards, more deleted or extended scenes (approx. 2 min.), as well as a few short alternative takes (approx. 1:30 min.) to offer. Good!

Conclusion: New Girl is a wonderfully likable comedy series that works so well precisely because its characters are dysfunctionally drawn in an extremely charming way. Carried by the enchanting Zooey Deschanel, who finally gets here the attention that she deserves at least since (500) Days of Summer, the series lives on its coherently cast ensemble, from the witty dialogues and plenty of quirky situation comedy, which more than once defies the rules of conventional comedy series. Even if the first season on DVD is not served completely, but only in two parts, the acquisition of this first box is worthwhile alone because of the scene in which Jess and her friends show how to dance to A groovy kind of Love by Phil Collins. Absolutely recommendable