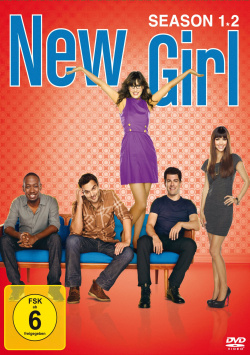 Content: The tumultuous adventures of teacher Jess (Zooey Deschanel) and her roommates Nick (Jake Johnson), Schmidt (Max Greenfield) and Winston (Lamorne Morris) continue into the next round. After Jess had no luck with the initially so well running relationship with her colleague Paul (Justin Long), she now wants to try it on Valentine's Day with Schmidt's help just with a one night stand. She does find a suitable candidate, but of course the erotic adventure ends in complete chaos. And even when she meets the rich and charming Russell (Dermot Mulroney), the father of a student, luck seems to be on her side only for a short time. Nick has similar problems, realizing that his relationship with lawyer Julie (Lizzy Caplan) has no future. And so he just tries dating younger women, which has disastrous consequences. But things get really bad when he runs into his ex Caroline (Mary Elizabeth Ellis) again and wants to give her another chance.

Meanwhile, Schmidt is struggling with his secret relationship with CeCe (Hannah Simone). For her, it seems to be just sex, but for him, it's becoming more and more. Things get complicated when Winston finds out what's going on between the two. But those aren't the only problems the WG has to deal with. A really mischievous student who shakes Jess` belief that all kids are lovable, a football injury that forces Nick, who doesn`t have health insurance, to go to Jess` gynaecologist and a reunion with Paul make for mighty chaos in the friends` lives - and mighty fun for the viewers...

The twelve concluding episodes of New Girl's first season also thrive on the charm of the characters and the occasionally offbeat humor, which blends wordplay, slapstick and whimsy into a likable and damn funny whole. Granted, the humor isn't as crowd-pleasing as other comedy series are. The characters, while extremely likable, are also just downright dysfunctional, which makes it a bit difficult to access for those viewers who prefer more simply drawn sitcom characters. In this case, Jess and her friends might also seem more like over-the-top art characters and just not friends you'll want to revisit again and again.

However, that's where the show's real strength lies. Its characters are different and completely wacky. But underneath this weird surface there is an incredible amount of closeness to life, which is expressed in their many bad decisions and character flaws. New Girl is not only weird and a bit crazy, but also has a lot of heart. And that's what gives the series its special charm. Sure, not all the jokes work equally well, some scenes are just too over the top and among the twelve episodes of this second half of the season there are also some small sags. But these are admittedly only a few small weak points, which are almost completely lost in the environment of the numerous successful aspects.

New Girl stands out pleasantly in any case from the current sitcom mass. Who already liked the first episodes, whose positive impression will be confirmed here again with many amusing gags and a really nice season finale. There remains actually only to look forward to the second season! Absolutely recommendable!

Picture + Sound: Also the episodes of the second half of the season present themselves on a good level for a current comedy series. The picture is very clean, the colors vibrant and the overall sharpness satisfactory. The sound mix allows the amusing dialogue to ring out clearly and powerfully from the home theater speakers, with the frontal area being particularly challenged. The English soundtrack sounds a little more harmonious and, despite the successful dubbing, is again preferable as many puns and dialogue simply work much better in the original. Good!

Extras: Both DVDs of this second season box have a few extras to offer. DVD 1 offers fans an inside look at the making of an episode (approx. 9 min.), as well as a few alternate jokes (approx. 2:30 min.). DVD 2 offers an amusing audio commentary on the season finale, which the four main actors recorded together. The optionally subtitled commentary is not really informative, but it is entertaining and sometimes quite funny.

In addition to the commentary, the second DVD also contains deleted and extended scenes (approx. 3:30 min.), amusing outtakes (approx. 9 min.) and more alternative jokes (approx. 2 min.). That's not really much overall, but fans of the series will definitely get their money's worth.

Conclusion:The second half of New Girl's first season perfectly continues the comedy series' likeably quirky tone. The characters, extremely charming in their own special dysfunctional way, and the witty dialogue, coupled with plenty of quirky situational comedy and the right amount of emotion, make for a comedy series that is as endearing as it is hilarious, one that continually defies common sitcom rules and works so well for exactly that reason. If you could already laugh heartily about the first twelve episodes, you should not miss this second season box set. Absolutely recommendable!