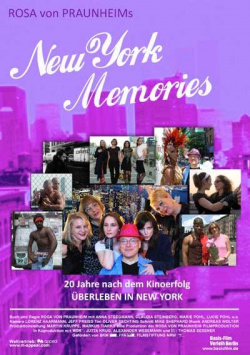 Twenty years ago Rosa von Praunheim delivered an entertaining as well as successful documentary about life in the Big Apple with "Living in New York". Now he revisits the city, the protagonists of his old documentaries about New York and allows the viewer a glimpse of his forty-year love affair with this very special city.

The documentary takes the viewer back to the wild 70s, thematizes the fight against AIDS in the 80s, shows why the 90s was a time of hopes that have been dashed again at the latest after September 11, 2001. Anna and Claudia from "Surviving in New York" tell how they have built their lives in New York over the last twenty years. In addition, the sisters Lucie and Marie Pohl, one a writer, the other an actress, have their say. And von Praunheim visits Isaac, who has known since he was twelve that he is not a girl but a boy and has made this public.

In sometimes very intimate images, the vibrant and diverse life of the city is captured. The interviews are interesting, amusing, sometimes rather trivial, then again stirring. Von Praunheim takes himself pleasantly back and rather puts other, not less interesting people in the center of the action. "New York Memories" thus becomes a very multi-layered portrait of the city, a very special declaration of love and an entertaining foray through forty years of the city's history - even though this aspect merely forms the framework for the documentary and therefore doesn't really go into depth. An entertaining and interesting documentary, which can be recommended not only to fans of the filmmaker, but also to all those interested in New York. Worth seeing