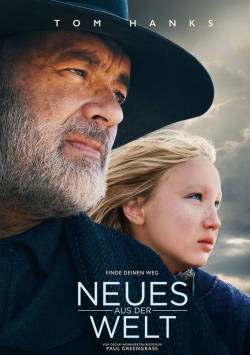 News of the World

In an age where the latest news from around the world is just a click away, it's hard to imagine that it was ever quite so different. Captain Jefferson Kyle Kidd (Tom Hanks) lives in such a time circa 1870, moving from town to town in the state of Texas to read news of the world to the people. As he travels the country, he finds a little girl (Helena Zengel) who has lived with the Kiowa for many years. It turns out that the child's name is Johanna Leonberger and she is the daughter of a murdered German immigrant couple. Kidd agrees to take the distraught girl to her relatives who live many hundreds of miles away. Although Johanna speaks only Kiowa, a special bond forms between the old captain and the child that grows stronger during the often perilous journey...

"News of the World" is the second collaboration between leading man Tom Hanks and director Paul Greengrass, following "Captain Phillips". The film adaptation of a novel by Paulette Jiles was originally scheduled for a theatrical release in January. But while the film was able to play in some theaters in the U.S., the rights migrated to Netflix in much of the world, where the Western drama can be seen as of now. Visually, this is a real shame, as the film is simply made for the big screen. Whether it's tracking shots across the sprawling prairie or a frightening sandstorm, Greengrass and his cinematographer Dariusz Wolski have captured truly gorgeous images that obviously can't deliver their full power on a TV (or even a tablet).

Dramaturgically, the move from cinema to streaming service is less tragic. The story is beautiful and the emotional climax at the end works really well due to great performances by Tom Hanks and Helena Zengel ("System Sprenger"). Still, it lacks the final spark that would elevate the thoroughly rousing narrative beyond "nett to watch" status. There are many very well done scenes that are sometimes extremely suspenseful, sometimes just moving. But there are hardly any moments that burn themselves into the memory for a long time. One simply notices that both from the impressive visual language, as well as from the strong actors still more could have been brought out.

But quite honestly: This is complaining on a high level. Because all in all "New from the World" is a really good, in places even very good film. For me, it's further proof that Tom Hanks is simply a reliable bank. Good: His roles are always somehow similar. But with his engaging charisma and his great talent he nips this point of criticism in the bud. If you like westerns and emotional dramas, you should definitely take a look at this one. Because the bottom line is - despite minor lengths - quite clearly: worth seeing!

"News from the world" is now on NETFLIX to see and also runs on 12.04.2021 in the drive-in Gravenbruch - and there also on the big screen!