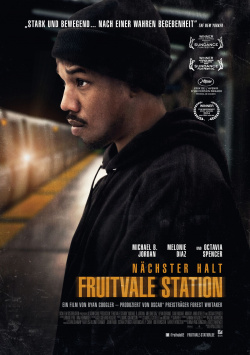 The case of 22-year-old Oscar Grant, who was the victim of racially motivated police violence on New Year's Eve 2008, shows just how topical the issue of racism unfortunately still is. The case shocked people not only in San Francisco, but throughout the United States. Around the world, the young man's death went through the media. But Grant was certainly not the last person to lose his life due to hate fueled by prejudice. For young director Ryan Coogler, that was the motivation to create a cinematic memorial to Grant that would also function as a social memorial.

The very depressing result is called Next Stop: Fruitvale Station, and it traces the last 24 hours in the life of Oscar Grant (Michael B. Jordan) in an almost documentary fashion. It's his mother's (Octavia Spencer) birthday, a day when everything is supposed to change for the better for Oscar. The ex-con is desperate to get his old job back so he can provide for his girlfriend Sophia (Melonie Diaz) and their daughter Tatiana (Ariana Neal). But as good as his resolutions are, fate just doesn't smile on Oscar. On this New Year's Eve alone, he faces quite a few setbacks, but he also gets to prove that he's serious about making the changes he promised. And that's reason enough to want to happily celebrate into the new year with his Sophia and his best friends in town. It turns out to be a beautiful night filled with joy and hope, but it comes to a tragic end on the way back at Fruitvale Station.

Next stop: Fruitvale Station is a very difficult film. This is not only because of the subject matter, but also because of the very stripped back production. Coogler allows the viewer to witness many events that on any other day would be rather inconsequential, and thus not necessarily the stuff of which great cinema entertainment is made. The first hour or so of Oscar driving around, talking to his mother on the phone, reflecting on his time in jail, or arguing with his girlfriend, then can be deliberately described as very plodding and drawn out. Only through the final act these moments get their very special meaning, which is why the film can unfold its real power only in retrospect.

So you have to bite your way through the somewhat unwieldy beginning to realize that Ryan Coogler has succeeded in creating a truly stirring and lasting work. This is also achieved by the very authentic acting of the actors, especially Michael B. Jordan. Jordan, who has so far mainly attracted attention with his lengthy guest role in the US series Parenthood and his appearance in Chronicle, could soon be playing in the first league of Hollywood's up-and-coming stars, as he has quite a hot iron in the fire with the Fantastic Four reboot. But even if the big time is yet to come for Jordan, it's safe to assume that his performance in Next Stop: Fruitvale Station will always be one of the very big highlights of his career.

Ryan Coogler has created a very uncomfortable, not exactly easily accessible, but in its apparent simplicity extremely stirring and important work that at its core is far more than just very good American independent cinema. And even though the film is not entertainment in the classic sense and is challenging in more ways than one, there is a very clear: worth seeing for this arthouse drama!

Cinema trailer for the movie "Next stop: Fruitvale Station (USA 2013)"
Loading the player ...