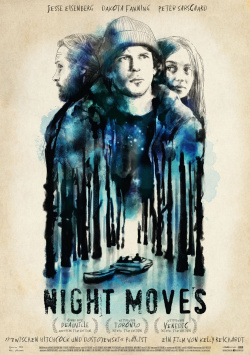 Josh (Jesse Eisenberg) leads an inconspicuous life on an organic farm. Behind its friendly, almost stoic façade, it bubbles enormously. He wants to set a sign, a sign against the exploitation of nature, against injustice and against the corrupt machinations of large corporations. Together with his allies Dena (Dakota Fanning) and Harmon (Peter Sarsgaard) he wants to blow up a dam. Despite minor difficulties, the preparations are going according to plan and the action can take place. But then something goes wrong and for the three young activists life will never be the same again…

"Night Moves" is after "The East" already the second film within a few months that deals with radical environmental activists. Director Kelly Reichardt is less concerned with the protest action itself. So only the preparations are shown, but not the actual blasting. Here Reichardt renounces any form of showmanship and instead always stays very close to the protagonists. Thus she wants to make it possible for the audience to penetrate into the psyche of the young activists. What makes young people become so radical? What are their real goals? How much guilt can be justified by these?

The last question is the subject of the final third of the film. Here Reichardt shows very impressively how the unforeseen consequences of the attack affect the psyche of the three involved, with the focus especially on Josh and Dena. Soon it becomes clear that the situation is in danger of escalating, which also heats up the already oppressive atmosphere of the movie. The convincing play of Jesse Eisenberg and Dakota Fanning underlines this impression.

At its core "Night Moves" is a really interesting, atmospheric and especially on a psychological level exciting movie. But Reichardt's very withdrawn staging also makes the whole thing a very bulky affair. Scenes of long silence and meaningful glances slow down every form of emerging tension again and again and make the whole thing a real test of the viewer's patience, especially in the first half. Admittedly, this style works very well from the moment Josh, Dena and Harmon get on the boat to attach their explosive device to the dam, as the oppressive atmosphere here is perfectly sufficient to create a high degree of thrilling tension. Otherwise, however, the intellectual claim of the production clearly stands in the way of entertainment value. And without such entertainment value, the film refuses to entertain a wider audience, which is really a pity in view of the fascinating visual language and the interesting subject matter.

Aficionados of brittle cinema fare, who want to deal with the question of how far rigid idealism should go and how long noble goals can be justified, will certainly get their money's worth in this psychodrama. Kelly Reichardt has staged a very intelligent thriller, which has many successful facets to offer, but packages them too cleverly to address more than just a small niche audience. And therefore, despite all recognizable qualities, there is only one: worth seeing with restrictions!