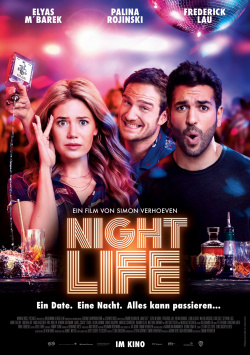 Milo (Elyas M`Barek) is tired of beating the nights away as a bartender. He would much rather open his own place with his best buddy Renzo (Frederick Lau). But unfortunately the friends can't get a loan because of Renzo's criminal record. But Milo is happy anyway: he has met the charming and attractive Sunny (Palina Rojinski) and is looking forward to their first date together that evening. It's just too bad that Renzo has tried to raise the money for his own bar on his own and that now not only some mighty sour gangsters are after him, but also Milo. And so what was supposed to be a relaxed date turns into a wild trip through nocturnal Berlin - not a particularly promising start for a possible relationship between Milo and Sunny.

With German cinema comedies it's such a thing. Especially in recent years, there was either typical fare from the house Schweiger and Schweighöfer, extremely flat Klamauk or works that convulsively try to combine humor and ambition. Every now and then, however, filmmakers manage to place themselves somewhere in between, which then ideally works really well. Nightlife, the new film by Simon Verhoeven (Welcome to the Hartmanns), is one such case. Yes, the humor is often pure slapstick. And yes, the characters are not infrequently overdrawn. But: unlike many other comedies, the characters always remain likeable, the pacing is never too over-the-top, and even platitudinous moments are saved by a large helping of charm.

When the nasty gangster-in-chief, wonderfully embodied by Nicholas Ofczarek, mutates into a well-behaved yes-man with his wife out of fear of her tantrums, or when Sunny takes revenge on a sleazy ex in a somewhat unusual way, it's not only very entertaining, but also really funny. And even moments that shouldn't actually work - like a game night that's completely over the top in itself - make for really good laughs here, as Verhoeven sacrifices his characters for the gags. So even these odd game night participants kind of grow on you, and you have to laugh not at them, but with them, as events in the small apartment completely escalate.

Nightlife may not be a masterpiece, but it's one of the funniest comedies in recent years. The chemistry between Elyas M`Barek and Palina Rojinski is utterly believable, and Frederick Lau gives the slightly kooky best buddy an absolutely endearingly chaotic performance. Watching this trio chase each other through nocturnal Berlin is great fun, and one is happy to forgive minor lapses. Amusing dialogues, a well-measured portion of slapstick, wonderfully weird supporting characters and good music - all this makes Nightlife bottom line: absolutely worth seeing!

Cinema trailer for the movie "Nightlife (Deutschland 2019)"
Loading the player ...