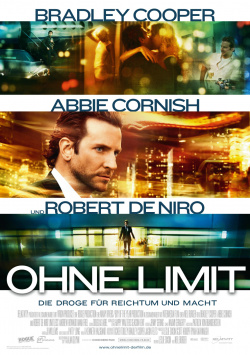 Imagine if there was a pill that could propel their minds to unimagined heights. What may sound like a dream to many soon turns into a tangible nightmare for writer Eddie Morra (Bradley Cooper), who suffers from chronic writer's block. It all starts so promisingly: after his former brother-in-law offers him a new, still secret drug to test, Eddie mutates into a walking genius. In no time at all, he completes his long-buried book, becomes the new prodigy on Wall Street, and also wins back the heart of his ex-girlfriend Lindy (Abbie Cornish). But when he receives a job offer from financial mogul Carl Van Loon (Robert De Niro) and, at the same time, a brutal gangster begins to take an interest in the revolutionary drug, Eddie is forced into action. The increasing dependence on the pills and the sometimes drastic side effects threaten to drive him mad. And there seems to be no way out of the vicious cycle.

With Without Limit, director Neil Burger (The Illusionist) has created a fascinating thriller that knows how to captivate the viewer from the first to the last moment. Admittedly, the logic takes a breather at some moments. Therefore, there are many an element of the story that shouldn't be scrutinized too closely. But the logic holes don't really harm the positive overall impression of the movie. Because the visual realization alone doesn't give the viewer much of a chance to think about it. Dizzying tracking shots draw the viewer into the action and make the feeling Eddie gets after taking the drug NZT almost palpable.

But also the way Burger visualizes what is going on in Eddie's mind, which has been extremely heightened by the drug, is almost brilliant - especially considering the relatively low budget. Cinematography, editing and music make Without Limit a very special audiovisual experience, but it's the good actors that really put the crown on it. Especially Bradley Cooper (Hangover, The A-Team - The Movie) portrays the transformation from a self-doubting loser to an intelligent womanizer bursting with self-confidence more than convincingly and even Robert De Niro doesn't let him play up against the wall. Abbie Cornish (Sucker Punch), on the other hand, threatens to be degraded to a mere pretty accessory in the first half of the film. But especially in the last third she is allowed to present more acting qualities, whereby also Lindy, played by her, gains in importance for the story.

Without Limit, based on Alan Glynn's novel material, manages to conjure up quite big suspense with lots of action on the screen with quite little means. In some scenes almost a trip turned into a movie, in other scenes filled with pleasantly dosed comedy, all this makes this film a real must-see for all lovers of original thriller goods from the USA. Absolutely recommendable

Cinema trailer for the movie "Without Limit (USA 2011)"
Loading the player ...