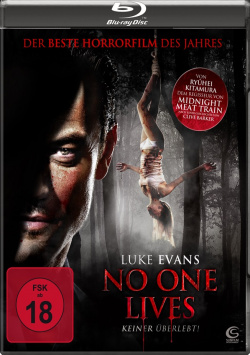 No One Lives - Blu-Ray

Contents: The young Betty (Laura Ramsey) is on her way to her new home with her nameless companion (Luke Evans). When they take a break in a small inn in the middle of nowhere, they clash with the gang around the crook Hoag (Lee Tergesen). The group has been in a tense mood since a bloody incident during a raid, which now threatens to unload. But at first it looks as if Betty and her boyfriend can escape the dicey situation. But then the hothead Flynn (Derek Magyar) decides to rob the couple. Together with the giant Ethan (Brodus Clay) he overwhelms the two and tries to torture data like the PIN number of the credit card out of the man. But suddenly the tide turns. For in the couple's trunk the gangsters find a kidnapped young woman (Adelaide Clemens) who is in total panic in front of "him" and assures her criminal liberators that none of them will survive a confrontation with "him". And soon a bloody massacre begins, which even the gangsters, armed to the teeth and superior in numbers, can't escape...

After the very successful Clive Baker adaptation "The Midnight Meat Train"... japanese director Ryuhei Kitamura once again presents "No One Lives", an extremely thrilling, brutal and atmospheric horror thriller, which apart from bloody splatter interludes also has a really thrilling story to offer, which is carried by quite convincing actors. Especially Luke Evans ("Der Hobbit - Smaugs Einöde") as an ice-cold and very imaginative killer delivers an almost frighteningly good performance, which also carries the movie through its more lengthy moments.

As the story for the horror genre usually begins (young couple falls into the hands of sadistic backwoods), the whole thing takes an interesting and effective turn. After that there are no big surprises, but Kitamura manages very well to keep the audience in a good mood. Although it is quite predictable for genre connoisseurs who will bless the temporal next with the constant crook reduction, the events always remain on a pleasantly high level due to the gripping atmosphere, a captivating camera work and a dense staging.

When the nameless killer strikes, this often has very bloody consequences. Unfortunately they were too bloody for the FSK, which is why the scissors had to be used here and there for the German version. The only positive thing about it is that this was mostly done so well that the cuts are hardly noticeable. Only in two places it is very obvious that something is missing here. Unfortunately, the final scene suffers from it, which takes some of the intensity out of this last sequence. Nevertheless: if you don't have the possibility to get the uncut version from Austria, you can also use this version. Because even though cuts are generally annoying, "No One Lives" wasn't mutilated so excessively that the movie wouldn't be any fun anymore.

No matter if it's a few bloody scenes more or less, Ryuhei Kitamura's latest excursion into the horror genre has become an extremely exciting work, for which there's definitely an "absolutely worth seeing"!

Picture + sound: The Blu-Ray image convinces with an atmospheric colouring, harmonious contrasts and a successful image sharpness. This ensures that even the smallest details are accentuated, especially in the brighter moments. The DTS-HD Master Audio 7.1 Mix offers some decent surround moments that are just as powerfully mixed as the more directional dialogues. Good!

Extras: Besides the trailer and some uncommented B-Roll recordings (about 6:09 min.) the Blu-Ray has twelve promo interviews with actors and makers to offer.

Fazit: "No One Lives" is a gripping thriller that has a very intense effect even in the slightly defused version. Director Ryuhei Kitamura manages very well to combine bloody splatter interludes with an exciting story to a stirring genre work, in which main actor Luke Evans is allowed to show his diabolic side. The film presents itself on the German Blu-Ray in a version shortened by almost two minutes, whereby the cuts only really stand out in two places. The audiovisual implementation, on the other hand, is convincing all along the line. Fans of atmospheric horror thrillers who can live with a few small cuts shouldn't miss this work. Recommended