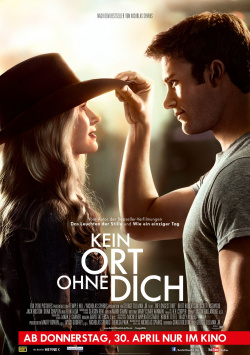 No Place Without You

Actually, the young student Sophia (Britt Robertson) has planned her life quite precisely. After her imminent graduation, she wants to intern at a prestigious New York art gallery and from there get a foothold in the scene. But her plans are thrown completely out of whack when she meets handsome bull rider Luke (Scott Eastwood) at a rodeo and falls head over heels in love with him. But is what develops between the two really strong and important enough to make her skip the lucrative internship for it. It seems that the student decides against love and for the career. But then she meets 91-year-old Ira Levinson (Alan Alda), whose life Luke saved after an accident. A close friendship develops between the old man, who has lost all will to live since the death of his beloved wife eight years ago, and Sophia when she agrees to read him the old letters he wrote as a young man (Jack Huston) to his Ruth (Oona Chaplin). And the more Sophie delves into their love story, the more it changes her view of her own romance. But it may already be too late for that...

No Place Without You is already the tenth film adaptation of a novel by Nicholas Sparks. After the last theatrical adaptation, the Southern romance The Best of Me, disappointed in almost every way and also flopped at the box office, director George Tillman Jr. (Faster) is able to somewhat reconcile fans of the bestselling author with his film adaptation of the novel published in 2013. That said, No Place Without You is certainly not the best Sparks adaptation. But the story told on two time levels, the many very beautiful images and the two attractive main actors make the film despite an overdose of kitsch and clichés to an all-round successful romance.

In the beginning, however, is a little thick. Sophia and her best friend's visit to the rodeo, where they immediately start drooling at the sight of the pithy guys, suggests bad things to come. And even the first snippets of dialogue exchanged by the rough-around-the-edges bull rider and the delicate coed are so cheesy that viewers quickly find themselves rolling their eyes in exasperation. But when the old-school gentleman then picks up his beloved for a first date, the film also reveals a slight hint of self-mockery, which increases the entertainment value considerably. This feeling is then intensified when Ira and Ruth's story is also woven into the plot. Not only is this love story very well acted and touchingly told. The contrast between the two storylines and the way they are brought together also works very well, despite a certain predictability.

Scott Eastwood, son of cinema legend Clint Eastwood, seems at first glance to be just another pretty boy who has to take his shirt off every chance he gets. But in fact, especially in the second half, the film allows him to show something like acting talent. This is also achieved by Britt Robertson (Under the Dome), who quickly puts into perspective the first impression of the naive college blonde that was created after the opening scene. There is a lot of chemistry between the two, so that especially the love scenes don't seem as unintentionally funny as it was the case in the last Sparks movie. But also between Jack Hudson and Oona Chaplin the chemistry is right, whereby their romance seems a bit more serious than the relationship between Sophie and Luke, which is more reminiscent of a teen romance.

In the end, No Place Without You is beautiful Hollywood kitsch without much depth, but with a high sob factor. If you want to see attractive people in beautiful settings, if you don't mind thin dialogue and lots of clichés, and if you just want to pine uninhibitedly once again, this is the movie for you. A work well adapted to its target audience, which absolutely deserves a worth seeing

Cinema trailer for the movie "No Place Without You (USA 2015)"
Loading the player ...