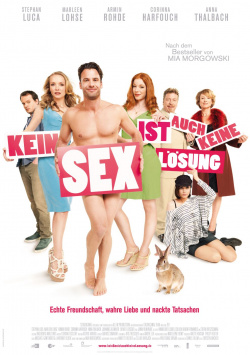 No sex is no solution either

Many filmmakers have tried to get to the bottom of the differences between the sexes and the resulting amorous confusions. But even though at the end of such films it always seems as if all problems have been solved, this subject matter always provides new material for cinematic gender wars. This adaptation of Mia Morgowski's hit novel No Sex Is No Solution, either, is the latest contribution to this genre. The idea is nice, the actors good, but still the comedy can not really convince.

Tom Moreno (Stephan Luca) enjoys his life. He has a successful job at an advertising agency and shares his bed with attractive sweethearts with nice regularity. He doesn't believe in the big love and relationships, therefore every acquaintance is over for him after three times of sex at the latest. For all other things there are his best friends Luke (Johannes Allmayer), Vince (Oliver Fleischer) and Paule (Anna Thalbach). But when his new colleague Elisa (Marleen Lohse) enters his life, the perfect picture is shaken. For not only does Tom fall unrestrainedly in love with the red-haired beauty. Other aspects of his life are also shaken to their foundations: the advertising agency is broke and dependent on the next big contract, which brings Tom together with an old affair (Janin Reinhardt), of all people. And then his mother (Corinna Harfouch) moves into the flat above Tom and Paule finds her first great love. And soon Tom realizes that he has to break his own rules in order to win Elisa over in this chaos.

It becomes clear within the first few minutes of Kein Sex ist auch keine Lösung that Stephan Luca is almost perfectly cast as the self-absorbed wooer. The charmingly arrogant way he looks into the camera during his monologues directed at the audience perfectly captures the character of the character. And Marleen Lohse also cuts a really good figure as the female counterpart, and not just on the outside. With good supporting actors like Anna Thalbach or Johannes Allmayer (vincent will meer), the film has additional potential, which it plays out far too rarely.

While the subplot around Paules first love has some very nice moments to offer, the rest of the film unfortunately degenerates into rather flat gags and weak dialogue. Director Torsten Wacker, who had made a really nice little comedy with Süperseks, unfortunately misses here too often what is of immense importance for a humorous film: timing! While some moments are dragged out too much, losing both comedic and romantic impact, some other gags often miss the laughing center by a hair's breadth. Others are so flat from the start that they are further away from a good laugh than the script is from a Grimme award.

While Hamburg is captured in very nice imagery and some scenes are tinged with nice local color, the rest of the film often just feels like a second-rate TV production. The successful moments make it clear how much of a shame that is. Because potential is there, and in a well-filled cinema with the appropriate mood, the comedy should then also at times provide a really good mood. But assuming that much more would have been possible here on the part of the actors and the basic idea, the end result is very disappointing. Therefore, if you like German romantic comedies of the not so sophisticated kind, you might get your money's worth here. However, those looking for clever dialogue, spot-on humor and genuine emotion will probably conclude that no film would have been more of a solution here.

Cinema trailer for the movie "No sex is no solution either (Deutschland 2011)"
Loading the player ...