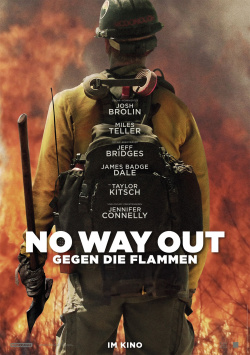 No Way Out - Against the Flames

With all his might, Eric Marsh (Josh Brolin) fights to get his 19-man team of firefighters finally recognized as a hotshot crew. Not only will this bring better pay, but it will also allow Eric to make decisions that have previously eluded him. But with the support of his mentor Duane Steinbrink (Jeff Bridges), he manages to get his men the recognition they deserve. From now on they fight on the front line against dangerous forest fires. The squad also includes rookie Brandon Donut McDonough (Miles Teller), an ex-junkie who wants to be a better man for his newborn daughter. He manages to become part of this very special squad - unaware of the dangers he has gotten himself into.

No Way Out - Against the Flames tells the true story of the Granite Mountain Hotshots, which made headlines in 2013, and not just in America. If you didn't catch it at the time, you definitely shouldn't Google it now, but just let this thrilling drama sink in. Because Joseph Kosinski (TRON: Legacy) has really implemented first class. Carried by a very strong ensemble, the film takes a lot of time to develop the characters and establish the dynamics within the team. While there are some spectacular scenes of the men battling huge fires, it's not primarily about the resulting moments of suspense, but rather the story of these men who risked everything to save many lives.

Sure, the whole thing isn't entirely free of clichés. When Josh Brolin, for instance, gazes thoughtfully in the direction of a column of smoke and starts talking to the fire, the viewer is already inclined to roll his eyes slightly annoyed. But even when an overdose of pathos is employed, the film ends up working really well. It establishes an emotional bond between the viewer and the characters in the story, allowing the dramatic final act to fully deliver its power.

Even though No Way Out - Against the Flames tells a typical American hero story and much of it follows a familiar pattern, the film is never boring. The good actors, the focus on the people behind the events of June 28, 2013 and last but not least the visually really great realization make this drama a good movie that not only offers first class entertainment but is also very respectful to the real Granite Mountain Hotshots. A bit too long, but still: absolutely worth seeing!