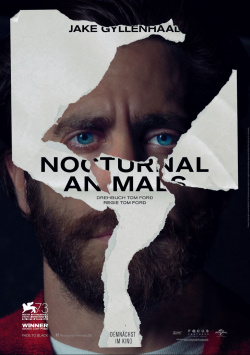 Art dealer Susan Morrow (Amy Adams) actually has everything going for her: Beauty, money, and a handsome husband (Armie Hammer). And yet Susan feels a certain emptiness inside her. But she is jolted out of her lethargy when she receives a manuscript from her ex-husband Edward (Jake Gyllenhaal), with whom she has had no contact for years. Susan follows the enclosed instructions to read the novel dedicated to her. The book tells the tragic story of a man (Jake Gyllenhaal) driving with his wife and daughter through Texas one night, where he is run off the road by a brutal thug (Aaron Taylor-Johnson) and his friends, with horrific consequences that bring the man face to face with his greatest fears. The story is disturbing, but it also fascinates Susan and forces her to reflect on her time with Edward once again.

Nocturnal Animals is the second directorial effort from fashion designer Tom Ford, following his acclaimed debut A Single Man seven years ago. In the mystery drama, for which Ford also wrote the screenplay, he tells two different stories that are, of course, related on some symbolic level. But overall, it is quite obvious that the story of the novel Susan is reading is far more exciting, gripping and involving than the frame story about Susan and Edward. Because the latter is characterized by long shots in which very little happens and a lot of sledgehammer symbolism, which is applied too thickly in places. Moreover, the opening sequence, which really has nothing to do with the rest of the movie, seems to be trimmed for shock effect and I don't fit in with the Hollywood crowd in such a way that it's almost unpleasantly embarrassing. The film really didn't need that.

Taking the story of Tony Hastings and his family falling into the hands of the brutal Ray Marcus on its own merits, Nocturnal Animals really is beyond reproach: atmospherically tightly directed, superbly filmed, superbly acted (especially by Jake Gyllenhaal and Michael Shannon) and thrillingly told. The Susan/Edward plot has some very good moments on its own, is also convincingly played, but suffers from some lengths and the all too intrusive symbolism. A little less really would have been more here.

The thriller-drama is a good example of how two good halves (even if one is clearly better than the other) do not make an excellent whole. The film isn't bad, but it's very unbalanced. And since you're expecting an even more profound message than the one you get served at the end - as good as that may be - due to the staging, you end up asking yourself after almost two hours what the whole thing was all about. As I said, Nocturnal Animals is far from being a bad movie. But this second work of Tom Ford is really not as important and ambitious as it would like to be. And so: Some enormous lengths, but alone for the story in the story and because of the great actors absolutely worth seeing!