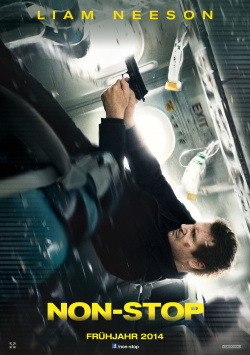 Air Marshall Bill Marks (Liam Neeson) has seen better days, both professionally and personally. A stroke of fate has driven him to the bottle and he's tired of maintaining the strong man facade for his job. He just wants to get the transatlantic flight he's supposed to be escorting to London over with as quickly as possible. But what begins as a routine flight soon turns into a murderous race against time. Because shortly after takeoff, Marks receives anonymous messages on his cell phone in which an unknown man threatens to kill passengers if he doesn't get $150 million. The air marshal is certain the blackmailer is on board, and he'll do anything to expose and take him out before he can commit the first murder. But time is running out and the unknown adversary has some unpleasant surprises up his sleeve for Marks and the passengers.

Non-Stop is the second collaboration between director Jaume Collet-Serra and lead actor Liam Neeson. After Neeson was rushed across the whole of Berlin by the Spanish director in Unknown Identity, this time he has to prove himself as an action hero in a much more confined space. As a viewer, you can't expect much logic here. In addition to numerous clichés, which include the rather one-dimensionally drawn characters, Collet-Serra also makes use of some plot twists that simply shouldn't be questioned too much. When the thriller is taken for what it wants to be, Non-Stop succeeds brilliantly in providing its audience with entertaining and exciting entertainment. Once you've struggled through the somewhat thick introduction, in which every effort is made to make clear what a broken character Bill Marks is, the ensuing almost 90 minutes are extremely fast-paced.

The search for the mysterious blackmailer follows very classic patterns, and at moments is reminiscent of a modern Agatha Christie variation above the clouds, spiced up with elements of the modern action thriller. Despite the not particularly original narrative structure, Collet-Serra repeatedly manages to pull the wool over the viewer's eyes before the somewhat disappointing truth is revealed in an explosive finale. However, although the resolution falls short of the expectations sown during the course of the murderous cat-and-mouse game, the suspense level can be kept high until the end if only because of the limited setting.

The actors all perform at a decent, but not outstanding level. Whether Julianne Moore, Downton Abbey beauty Michelle Dockery or the new Oscar winner Lupita Nyong`o, they all deliver solid performances, which are, however, thwarted by the rather poor script again and again. Actually, only Liam Neeson is allowed to really hit top form. In the best 96 Hours mode, he gets to prove again and again that he still cuts a damn fine figure as an action hero even when he's over 60. Whether in a duel in an airplane lavatory or in the narrow corridors of the passenger cabin, when Neeson strikes, even the most perfectly thought-out coup is of no use to the bad guys.

Non-Stop won't win any awards for originality, for high acting, an intelligently thought-out dramaturgy or profound dialogues. But in terms of entertainment, this thriller is a real high flyer. If you like exciting popcorn cinema and appreciate action movies with Liam Neeson, you can safely check in here. Because despite some bumpy logic holes, you will be maneuvered here by chief pilot Jaume Collet-Serra and his crew very skillfully through 100 entertaining minutes of cinema. And for that there is also a deserved: Worth seeing!