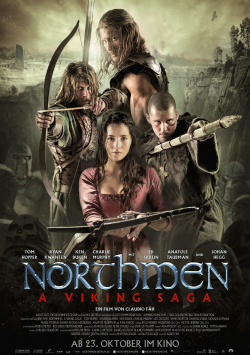 Banished by their own king, a group of fearless Vikings led by Asbjörn (Tom Hopper) have only one option to return to their homeland: they must go to Britain to plunder the gold treasures of Lindisfarne Monastery. But a violent storm prevents the men from reaching their destination. They are stranded off the Scottish coast and quickly find themselves surrounded by enemy warriors. Now they must manage to save themselves to a distant Viking settlement. As they make their way through the Scottish Highlands, the Vikings meet Lady Inghean (Charlie Murphy), the daughter of King Dunchaid (Danny Keogh). Hoping for a handsome ransom, they take the woman into their custody, unaware of the trouble they are about to get themselves into. For the notorious wolf pack of the king, led by brutal Hjorr (Ed Skrein), attaches itself to their heels from now on. A bloody hunt begins, in which the Vikings receive unexpected help from the mysterious monk Conall (Ryan Kwanten). But it will take more than a battle-hardened monk and a handful of brave Vikings to defeat Hjorr and his henchmen.

With Northmen - A Viking Saga, Swiss Claudio Fäh (Hollow Man II, Coronado) has tried his hand at a great adventure film, which in itself can certainly be called a success. The fact that the film was shot in South Africa instead of Scotland for financial reasons is hardly noticeable in the wonderful landscape shots. Also, the effects as well as the fight sequences are neatly realized and the actors convincingly fight their way through the story despite the rather weak script. What the film really has to struggle with, however, is the competition, which is now not only in the cinema, but increasingly on television.

Series such as Vikings or of course Game of Thrones have impressively proven what such material can do. It is no longer enough that wild grunting men fight in an atmospheric landscape through elaborately staged battles. Unfortunately, Northmen - A Viking Saga doesn't have much more to offer. The fight sequences are much less ruthless than in comparable TV productions. Thus, interested viewers actually lack any incentive to pay money for something they can see better, more elaborate and also more brutal on TV. Only the prospect of getting the effective images on the big screen should not really be enough.

Fäh has failed to give his film that special something that sets his work apart from similar productions. As accomplished as many aspects of his production are, the final product is all too conventional and interchangeable to elicit any real enthusiasm from the viewer. If you just expect solid Viking entertainment, don't care for real surprises and can be satisfied with comparatively tame fights, you'll get some really good entertainment here. But if you expect a feature film to have something special to offer in comparison to TV series and home cinema premieres in terms of show values or even in terms of the story, you will definitely not be able to make friends with this all-too-conventional work. And therefore there is also only one: With restrictions worth seeing!

Cinema trailer for the movie "Northmen - A Viking Saga (Deutschland/Schweiz/Südafrika 2014)"
Loading the player ...