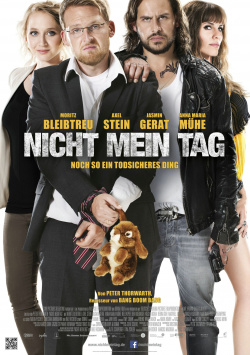 In the past, Till (Axel Stein) was a real party animal. But those days are long gone. Now he is a bland bank employee who dreams of his sexy colleague, while at home his wife Miriam (Anna Maria Mühe) and their common son Niko wait for him. But Till doesn't really like to go to his bland family home in the evenings. Because Miriam wants to realize herself with her own bag collection, there are always arguments between the couple. There has been no harmony or even sex for far too long. It is a rather dull, boring life, from which Till is suddenly and unintentionally torn out. When the small-time crook Nappo (Moritz Bleibtreu) robs Till's bank one day, the frustrated family man is taken hostage. But that's not all, he gets caught up in a chain of chaotic events that lead to him suddenly being involved in an illegal deal as Nappo's partner. This is really not Till's day.

Eight years after the end of his Unna trilogy, which began in 1999 with the cult film Bang Boom Bang - Ein todsicheres Ding, director Peter Thorwarth finally returns to the cinemas and back to the Ruhr region with a new film. Actually, he didn't want to shoot another Ruhrpott comedy to prove that he can also convince in other genres. But the novel Not My Day, penned by Stromberg author Ralf Husemann, was just too good to leave to another director - especially since Thorwarth's humour has a very similar tone to Husemann's. And so it is now a Ruhrpott comedy again. And so it has now become another comedy with a Ruhrpott connection - and that's a good thing. Because Not My Day has become pretty damn funny.

Many of the German comedies that have hit theaters in recent years have leaned heavily on the formula for success that Til Schweiger kicked off with Keinohrhasen. As amusing as some of these films have been, there really isn't much variety in the comedy landscape at the moment, with a few exceptions. Thorwarth's irreverent and less polished style is a refreshing change. It's true that not every gag is funny and sometimes the chaos overshoots the mark a bit. Nevertheless, the road movie comedy works really well. This is not only due to the fun script, the sometimes a bit black humor, but also due to the good chemistry between the two main actors Axel Stein and Moritz Bleibtreu. It's a lot of fun to watch Bleibtreu as a petty thug with a wonderfully politically incorrect mouth and Axel Stein as a Biedermann par excellence deliver beautifully oblique word fights and slowly mutate into the perfect duo.

The two are supported by a deliciously exaggerated acting Jasmin Gerat and Anna Maria Mühe, who initially does not have to play the most sympathetic role, but in the end is allowed to rise to top form. A few nice short appearances, including an incredibly funny scene with Milan Peschel and an old acquaintance from Bang Boom Bang - Ein todsicheres Ding and Goldene Zeiten, a fitting soundtrack and a few small allusions to the Unna trilogy or Axel Stein's Hausmeister Krause past, further intensify the positive overall impression.

May be that the humor of the film is not always on the upper level curve or distinguished by profound cleverness. But the quirky characters, the crudely funny dialogue, the fast-paced staging, and the many little details Thorwarth has incorporated into the story make Nicht mein Tag an entertainingly fun film and the best German buddy comedy in a long time. And for that, it gets a more than deserved: Absolutely worth seeing!

Cinema trailer for the movie "Not my day (Deutschland 2014)"
Loading the player ...