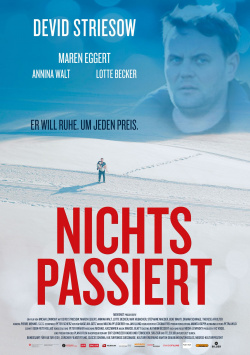 Thomas (Devid Striesow) is looking forward to the family holiday in the Swiss Alps. But the mood is rather depressed. His wife Martina (Maren Eggert) doesn't really have time for a vacation and his daughter Jenny (Lotte Becker) doesn't feel like it. And then the conflict-shy Thomas has also been persuaded to take Sarah (Annina Walt), the 15-year-old daughter of his boss, with him. Thomas is so concerned with harmony that he drives his wife crazy and completely overlooks the fact that his daughter isn't really happy either. Nevertheless, he doesn't let himself be distracted: this holiday is going to be perfect! But then a problem arises at a party between Sarah and the son of the landlord of the holiday home. And now Thomas can't look the other way anymore, he has to do something. But in an effort to avoid major conflicts, he becomes increasingly entangled in a web of lies and half-truths that maneuvers him closer and closer to the abyss.

Nothing Happens is the new film from Micha Lewinsky, who had a surprise success in 2009 with the comedy Die Standesbeamtin. In terms of tone, these two films couldn't be more different. Although Die Standesbeamtin was not a superficial film, the unusual romance can certainly be described as light entertainment. That is absolutely not the case with Nothing Happens. In an oppressive manner, Lewinsky here traces how a person who is actually peace-loving only falls into an abyss of lies and ultimately violence out of fear of conflict. As a viewer, you can feel the noose tightening tighter and tighter around Thomas, and how his inability to speak the unpleasant truths inexorably leads him away from what is, in itself, a well-intentioned path.

The inevitable escalation of events may seem a little overdone in the end. But on reflection, the film's final act is an extreme, yet entirely logical, consequence of Thomas' behaviour. Through his lies and silence, he has built an arguably shaky dam that was bound to break at some point, leaving a swath of devastation in its wake. How Lewinsky releases his characters from this escalation is superbly handled and ensures that the film lingers long after it's over. This is almost impressive, especially given its initially very quiet and sustained narrative.

Nothing Happens is not necessarily a great film that needs to be seen in the cinema. Despite some beautiful and atmospheric shots of the Swiss Alps, the drama does feel more like a chamber play with an enormous psychological density. But especially the excellent performance of Devid Striesow and the really interesting, thrilling story make sure that lovers of German-language arthouse films won't regret buying a movie ticket. Therefore, in the end, there is also quite clearly a: Worth seeing!

Cinema trailer for the movie "Nothing Happens (Schweiz 2015)"
Loading the player ...