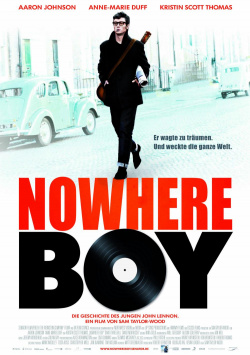 Liverpool in the 1950s. Fifteen-year-old John Lennon's (Aaron Johnson) rebellious ways are getting on the nerves not only of his teachers, but also of his resolute Aunt Mimi (Kristin Scott Thomas), with whom John was raised. Only his Uncle George, who encourages John's love of music, gets along with the boy. When George dies, a world comes crashing down for John. But at the funeral, he sees his mother Julia (Anne-Marie Duff), a complete stranger to him, and decides he finally wants to meet her. Julia is initially completely thrilled when her son suddenly appears on her doorstep. Her fun-loving nature quickly captures the teenager and when she introduces him to the world of rock `n` roll, she has finally won his love.

John is absorbed in his newfound relationship with his mother, even forming a band and meeting the young, extremely talented guitarist Paul McCartney (Thomas Brodie Sangster) - unaware that this will lay the foundation for a world career. But then John learns that Julia is far from the fun-loving woman he's met in recent weeks...

"Nowhere Boy" is far from a bad movie. Aaron Johnson ("Kick-Ass") plays young John Lennon brilliantly, and the relationship between him and his mother is as engagingly drawn as that between the two mismatched sisters. The problem the film faces is the same one "Coco Chanel - The Beginning of a Passion" had to contend with: audience expectation. For in a film about John Lennon, they naturally expect to see more about his music and about the Beatles. But even though we can watch the beginning of the great career and just get to see the first meeting between Lennon and the even younger Paul McCartney, "Nowhere Boy" is in the end neither a biography nor a music film, but a moving family drama.

As such, however, the film can fully convince. The contrast between the light-hearted moments John experiences while making music, seducing beautiful classmates or on outings with his mother and the difficult, sad and dark moments in the life of the teenager and later world star are hauntingly staged and intensely acted. Particularly impressive is once again Kristin Scott-Thomas, who as Aunt Mimi at the beginning gives the impression of absolute emotionlessness, but in the course of the film shows many different facets, sometimes only in the form of small changes in facial expressions and gestures, which makes her character one of the most interesting of the whole film.

The very good screenplay, written by Matt Greenhalgh ("Control") based on the biography of Lennon's half-sister Julia Baird, is full of wonderful dialogue and poignant emotion without seeming cheesy or contrived. Embedded in beautiful images that seem to transport the viewer right back to the 1950s thanks to the coherent production design and good camerawork, "Nowhere Boy" thus ends up being a drama well worth watching despite small lengths that may not quite meet the expectations of Beatles fans, but still pays tribute to the great talent of John Lennon (and also his bandmates) in a nice way. Worth seeing