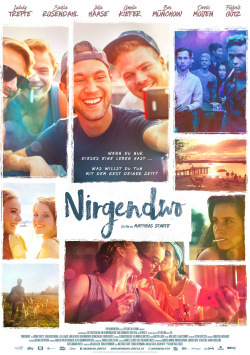 Danny (Ludwig Trepte) has turned his back on his small hometown to study business in the big city. After that, the world is open to him. At least that's what Danny believes, until the unexpected death of his father brings him back home. There, time seems to have stood still. With his old friends, he relives the lightheartedness of a bygone youth. And his love for his old flame Susu (Saskia Rosendahl) also flares up again. But can Danny really find happiness in the past, or will he have to face the difficult responsibilities that his uncertain future brings? And is he willing to face the conflicts he once ran from to do so?

Nowhere is a very conventional coming-of-age story that is beautifully filmed, but doesn't have much more to offer than that superficial beauty. The characters' problems are absolutely clichéd and strictly luxury problems. And of course it's not enough that main character Danny has to deal with his worries about the future and his past. No, everyone has their baggage to carry here, of course. The worries and problems of the characters may be understandable in themselves. But that through them not only relationships and friendships, but the own life is questioned, is but a little exaggerated.

The visuals and the good soundtrack can stand up to some of the dramaturgical weaknesses and clichés, but truly not all of them. The same goes for the actors, who are very good in themselves, such as Saskia Rosendahl, Jella Haase or Ludwig Trepte (Unsere Mütter, unsere Väter), who all make an effort but can only partially free themselves from the stereotypical drawing of their characters. One notices that director Matthias Starte has an eye for aesthetics, that he is able to translate moods into images very well and that he knows how to transport the feeling of being at a new stage of life onto the screen in a very believable way. But what his production clearly lacks is restraint. Everything here seems somehow overloaded, both the use of clichés, as well as the dramaturgy and the imagery, which is also particularly evident in the last scene.

So in the end it can be said that somewhere in Nowhere is a really good, beautifully realized film. However, Starte has clearly wanted too much and gets in his own way. As a result, his drama has become nothing more than a shallow soap opera with interesting but too half-baked elements served up. Beautiful people, beautiful pictures - that's nice to look at, but nothing more. And that's why in the end there is only one: still worth seeing with some deductions!

Cinema trailer for the movie "Nowhere (Deutschland 2016)"
Loading the player ...