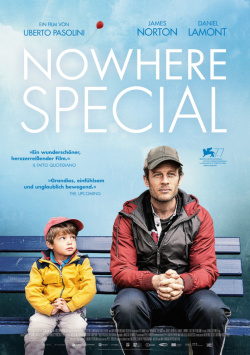 John (James Norton) ekes out a living as a window cleaner in a small Northern Irish town. He can just about provide for himself and his four-year-old son, Michael. But money is not John's real concern, for he is seriously ill. Michael has no idea that his father has only a few months left - a few months in which John must find a new family for his son. He wants to know the boy will be okay when he's gone. But what must the perfect family for Michael look like? Where will his son be in good hands? And can he even make the right decision? Time and again he meets with potential parents for Michael, but he just can't bring himself to make a decision - and time is running out...

"Nowhere Special" is not an easy movie to watch. How could it be, given the story of a dying father seeking a new family for his son. But Uberto Pasolini does an excellent job of avoiding pushing too hard on the tearjerker and drowning his production in oppressive melancholy. Instead, he tells the moving story in an astonishingly grounded and pleasantly authentic way, which is especially underlined by the performance of James Norton. He plays the single dad, who wants to keep the impending suffering away from his son for as long as possible, with restraint and, precisely because of that, extremely intensely.

With the questions he has to ask himself at every meeting with potential new parents for his child, you deal with them for a long time even as a viewer - especially when you have children of your own. How would you decide if you were in his shoes. Is financial security so important that one can make some sacrifices for it on an emotional level? Will the child be better taken care of by a large family than, say, by a single mother? And is it even possible to make the right decision in such a situation?

"Nowhere Special" is a wonderful film that hits right to the heart with its unagitated style and moves you to tears with its fitting ending without ever getting cheesy. It's a great acted arthouse cinema gem that deserves all the attention it can get. From me, it gets an unequivocal: Absolutely worth seeing!