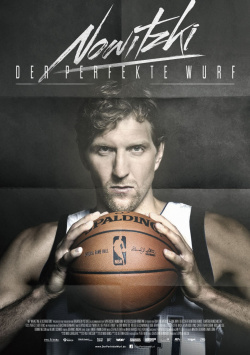 When Holger Geschwindner, former five-time German champion in basketball, discovers an extremely talented 16-year-old boy at a game of a Würzburg youth team and offers him after the game to take care of his career from now on, the two do not yet suspect that this would be the beginning of a unique success story. For today, the two-metre boy of yesteryear is one of the most successful and best players in the American NBA, a hero for countless fans of all ages, an idol for young talent and one of the very great popular figures in international sport. His name: Dirk Nowitzki. Despite all his successes, the boy from Würzburg has remained very modest and doesn't really like being the center of attention. So at first he wasn't too keen on the idea of a documentary about his career and his life. He would only throw a ball into a basket quite well, that is nothing special. Sebastian Dehnhardt, director of the celebrated Klitschko documentary, saw things differently. And fortunately he managed to convince Nowitzki of his intention, because Nowitzki - Der perfekte Wurf has become an excellent and extremely entertaining documentary in terms of content and craftsmanship.

With countless archival footage showing Dirk Nowitzki from his beginnings in high school to his greatest triumph, winning the NBA championship in 2011, Dehnhardt traces the likeable basketball player's rise from the provinces of southern Germany to the top of world basketball. The focus is not only on Nowitzki himself, but also on his very special relationship with his mentor and coach Holger Geschwindner, through whom the 2.13m man learned discipline, grounding and, of course, the perfect shot. The film then also clearly benefits from the fact that Geschwindner is a true original, who as a viewer is a pleasure to listen to.

Sebastian Dehnhardt knows very well how to get the best out of his interview partners. But he also knows how to present the interviews so that they don't seem too dry and the viewer is always entertained. So the right archive footage, the appropriate soundtrack and the editing are also important elements that make Nowitzki - Der perfekte Wurf work so well. Extremely rousing footage of Dallas Mavericks games alternates with old family videos, humorous and self-deprecating moments stand right next to more serious, thoughtful statements. This creates an extremely varied overall picture, which ensures that this documentary has not become boring for even a second.

Whether he is reciting a long list of amusing nicknames on Conan O`Brien`s Late Night Show, having to listen to U.S. President Obama say that he is a great player but a lousy singer, talking about personal as well as professional defeats or being celebrated by the crowd, Dirk Nowitzki always makes a very honest, down-to-earth and likeable impression. He is a sportsman for whose performance one has enormous respect, at the latest after this film, but whom one also envies his great success from the bottom of one's heart. A success that one wishes for this film as well, since Sebastian Dehnhardt has not simply staged a one-dimensional paean to a top athlete, but a truly entertaining, exciting and multifaceted documentary. And that's why it's not just for basketball and Nowitzki fans: you shouldn't miss this great sports documentary! Absolutely worth seeing!

Cinema trailer for the movie "Nowitzki - The Perfect Throw (Deutschland 2014)"
Loading the player ...