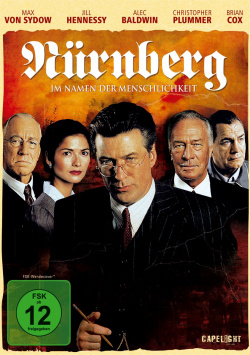 Film: After the end of World War II, some of the most important war criminals are to be tried before an international military tribunal. Legal representatives from England, the United States, France and the Soviet Union are to ensure that the 22 accused get a fair trial, at the end of which there will be a punishment commensurate with their proven guilt. Robert Jackson (Alec Baldwin), chief prosecutor for the Allies, has taken on the difficult task of preparing for the trial. It is clear to him that there can only be one place where the war criminals will be brought to justice: in Nuremberg, the very place where Hitler once sealed the fate of the European Jews with the Nuremberg Laws. For eleven months, Hermann Göring (Brian Cox), Albert Speer (Herbert Knaup) and the other defendants must face the international military tribunal, in a trial held in the name of humanity that will go down in history not only from a legal perspective.

Nuremberg was already staged for television in 2000. The lavishly produced two-parter impresses primarily because of the great cast, from which especially Brian Cox as Hermann Goering, Christopher Plummer and Alec Baldwin stand out. But Herbert Knaup, one of the few German actors in this internationally cast production, also delivers a haunting performance as Albert Speer.

Because the film was also made using the visual and audio recordings of the real trial, held between November 1945 and October 1946, the trial sequences in particular have a certain degree of authenticity. It is a pity that this has not been realised in all areas. For example, it is surprising that signs in bombed-out Nuremberg appear to be in English and distances are given in miles rather than kilometres. While this is only noticeable on close inspection, it clearly tarnishes the overall positive impression. In addition, the makers have taken some dramaturgical liberties that prove to be completely unnecessary in the end. Especially the implied romantic relationship between Robert Jackson and his sidekick Elise Douglas, played by Jill Hennessy, has no meaning for the actual story and dilutes the intense effect of the events a bit.

Nürnberg is still a good TV drama, but in the end it falls short of its potential. If the makers had dispensed with the liberties clearly tailored to American audiences and had put a little more effort into the set, the film would certainly have become more than just a good historical judicial thriller. As it is, however, the drama unfortunately fails to convince throughout its entire running time of just under three hours. In the end, however, it is the good actors and some gripping moments that ensure that Nuremberg, despite its weaknesses, on balance, is still well worth watching!

Picture + Sound: The fact that the two-parter is a more than ten-year-old TV production, the picture here and there to look. Especially in the darker scenes, slight image noise and weaknesses in contrast and detail sharpness can be discerned. Overall, however, the overall sharpness and coloration are on a good level, which is why the picture quality still leaves a good impression on balance. The stereo sound is quite front-heavy, but the dialogue, which is what primarily matters in this film, is well intelligible and coherently mixed. Good!

Extras: Unfortunately, there is none bonus material.

Conclusion: Nuremberg is a good TV drama that can score with good actors and a largely exciting production. Some dramaturgical liberties and weaknesses in the equipment tarnish the positive overall impression. But the strong actors and the gripping implementation of the process make up for some of the weaknesses, which is why in the end the conclusion Recommendable seems more than appropriate