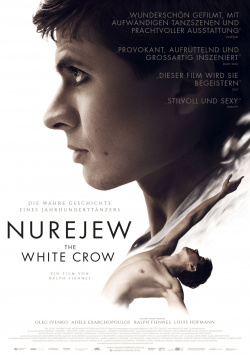 Paris in the 1960s: At the height of the Cold War, the Soviet Union sends its best dance company to the West to show that they are also an enormously powerful force culturally. Among the dancers of the Leningrad Kirov Ballet is Rudolf Nureyev (Oleg Ivenko), who wows the audience with his virtuosity. For the KGB, however, his rebellious nature is a real problem. Every step of the young dancer is monitored by spies. Nureyev is aware of this, yet he allows himself to be whisked away into the cultural hustle and bustle of Paris by the beautiful Chilean Clara Saint (Ad&egrave;le Exarchopoulos). The more time he spends here, the greater his desire to permanently enjoy the freedoms of the West. He decides that he can no longer go back to his homeland and wants to apply for political asylum in France. It's a risky wish, and one that Nureyev could find extremely dangerous to carry out.

With his third directorial effort, Nureyev - The White Crow, Ralph Fiennes tells the incredible story of Soviet ballet legend Rudolf Nureyev. Screenwriter David Hare (The Reader) has slightly altered the true events by taking some dramaturgical liberties. Still, it was important to Fiennes to depict not only the events but also the time in which they were set as authentically as possible. Costumes, sets and the decision to shoot on 16mm rather than digital are all designed to achieve this effect. Overall, it also does a really good job of capturing the 60s in Paris and the particular mood during the Cold War era. But due to the use of many flashbacks, which should reveal more about the life of the dancer, there are also a few lengths, from which the tension of the main plot has to suffer a little.

Actorically, however, the drama can convince all along the line. It proves to be a special highlight that Fiennes could win the Ukrainian world-class ballet dancer Oleg Ivenko for the title role, who is not only convincing in the ballet sequences all along the line. He is assisted by an international ensemble that includes Louis Hofmann (Dark) from Germany and Ad&egrave;le Exarchopoulos (Blue is a Warm Color) from France. The fine acting of the cast also helps to overcome some sequences that seem overly dry or a wee bit plodding.

Nureyev - The White Crow is a very ambitious piece of work, and it is always apparent that it has been a real passion project for Fiennes. The result is not always convincing, but when the film works, it works really well. The sequence alone, in which Nureyev asks for political asylum at the airport in Paris, is hard to beat for tension. Moments like this, despite a few flaws, make the film based on true events, all things considered: absolutely worth watching!

Cinema trailer for the movie "Nureyev - The White Crow (Großbritannien/Frankreich 2019)"
Loading the player ...