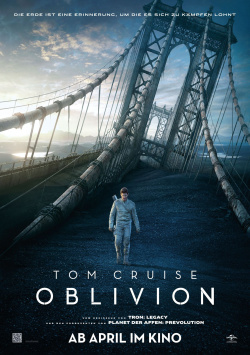 Back in 2005, Joseph Kosinski had an idea for a dark science fiction adventure that he wrote down in graphic novel form, hoping to turn it into a screenplay later on. But work on his film Tron: Legacy made it impossible for him to pursue the project. Fortunately, the story came to the attention of producers Barry Levine and Jesse Berger, whose support helped find investors for the film adaptation of Kosinski's idea. The result is a visually gorgeous sci-fi thriller that, while borrowing many of its ideas from other films, has combined them into a highly entertaining whole.

Oblivion is set in the year 2077. It has now been six decades since Earth was attacked by an alien life form. While the war was won, the planet was subsequently uninhabitable for humans. Therefore, the survivors of the terrible war were shipped in colonies to a new home, only technician Jack Harper (Tom Cruise) and his colleague Victoria (Andrea Riseborough) must remain on Earth for several weeks to oversee the mining of resources vital to the new colonies. Every day Jack has to fly from the station above the clouds to Earth to check the surveillance drones and repair them if necessary. It's not an easy job, as some of the alien invaders are still hiding on Earth, taking every opportunity to get their hands on technology that's still working. But so far Jack has mastered every danger sovereign. But when a space capsule crashes over his patrol area and Jack is able to rescue a survivor (Olga Kurylenko) from the wreckage, he sets off a chain of events that completely calls into question not only his future, but his past as well.

Whether it's Wall-E, 2001, Moon, or The Omega Man, Kosinski has very obviously drawn from various genre representatives. However, his film is not an unimaginative copy. Rather, the director pays tribute to a genre he holds in high esteem and its representatives by putting his own personal touch on well-known motifs and inserting them into a new, rousing story. Sure, there's nothing really new about what's on display in Oblivion. Even the big, surprise twist in the final third is something science fiction fans should have come across before in a different form. In addition, a slightly more consistent ending would have been quite desirable, as the last two minutes rob the story of a bit of its effectiveness. Nevertheless, these weaknesses weigh very little in the end, because the bottom line is that Oblivion is quite great popcorn cinema with high entertainment value and even higher spectacle value.

The post-apocalyptic world that Kosinski has created here with the help of his special effects team is oppressive on the one hand, but also fascinatingly beautiful on the other. The way familiar landmarks of New York or Washington are inserted into a landscape that has been reclaimed by nature is simply magnificent. This world seems familiar and strange at the same time, which gives the film a very special atmosphere that is hard to resist, especially as a fan of apocalyptic science fiction stories.

Although the actors are almost relegated to secondary importance, Tom Cruise and Andrea Riseborough do their thing really well. Olga Kurylenko, on the other hand, is not allowed to show any real talents except for her looks. And also Morgan Freeman and Nikolaj Coster-Waldau don't really leave a lasting impression in their short scenes. On the other hand, the story doesn't even demand it, which is why these rather average acting performances don't stand out negatively at all.

The thrilling story, the great effects, some very good action sequences, the music by M83 that reminds a bit like a mix of Hans Zimmer's Inception music and the soundtrack to TRON: Legacy and also lead actor Tom Cruise make Oblivion a winner all along the line, despite its small weaknesses. Great entertainment cinema that doesn't just flaunt its special effects, but also takes enough time for the characters and their story. For this we give it a more than deserved: Absolutely worth seeing!