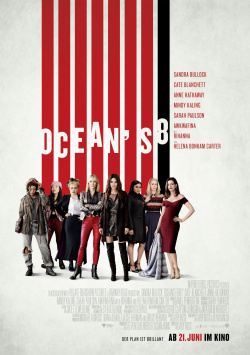 Almost six years Debbie Ocean (Sandra Bullock) has been in prison. Time enough to plan the perfect score. Barely free, Debbie convinces her best friend and former partner in crime Lou (Cate Blanchett) to attempt the impossible: stealing $150 million worth of diamonds from actress Daphne Kluger's (Anne Hathaway) neck during the Met Gala. It's an almost impossible feat - but Debbie has a foolproof plan. All it takes is the right team, which Debbie and Lou find in jewel thief Amita (Mindy Kaling), cunning con artist Constance (Awkwafina), fence Tammy (Sarah Paulson), unbeatable hacker Nine Ball (Rihanna) and debt-ridden fashion designer Rose Weil (Helena Bonham Carter). Together, the women set events in motion that could lead them to incredible wealth - if everything actually goes according to plan.

Ocean`s 8 is not a reboot or remake of the popular Ocean`s movies starring George Clooney, Matt Damon and Brad Pitt, but rather a sequel - just with a new, all-female team. And that works really well. Next to Ocean`s Eleven, Ocean`s 8 is the best part of the series. Admittedly, the film does not necessarily have an enormous depth. And it really doesn`t reinvent the wheel. But director Gary Ross and his well-dressed cast manage to interpret the set pieces of classic heist movies in such a loose, funny and rousing way that the viewer has a lot of fun despite the high recognition value.

There are quite a few references to Danny Ocean and the events of the previous films. Yet Ocean`s 8 somehow manages to be something all its own. Sandra Bullock is truly wonderful as the ruthless crook. In the original English version, she also gets to use her good German skills, which makes for extra laughs and especially makes a small guest appearance by a famous German even more amusing. But even in the dubbed version, the crook comedy is extremely entertaining until the end.

When it comes to the actresses, Anne Hathaway definitely needs to be singled out. True, the entire ensemble is really good - even Rihanna, who hasn't really shined as an actress so far. But Hathaway is so wonderful as the self-absorbed acting bitch that every scene with her is an absolute highlight. Her acting embodies what Ocean`s 8 is all about: she just seems to really have fun playing this role. And this is also transferred to the audience, which is offered almost two hours of fun of the particularly whimsical kind. No masterpiece, but exactly what is promised to the audience. And for it there is quite clearly one: Absolutely worth seeing