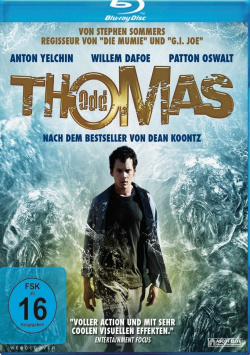 Contents: The English word Odd means something like strange, strange or strange. And this applies to the young snack cook Odd Thomas (Anton Yelchin). Because Odd has the gift to communicate with the dead and foresee great disaster. Whenever the eerie Bodachs appear, a bloody tragedy is not far away. The more ghostly monsters that appear, the worse the catastrophe will be. When a strange man enters the snack bar where Odd works, he quickly realizes that a particularly great disaster is threatening his hometown. Because with the stranger, more Bodachs appear than ever before in the city. Together with his girlfriend Stormy (Addison Timlin) and Chief Porter (Willem Dafoe), two of the few people who know about his gift, Odd now tries everything to avert the catastrophe. But his enemy always seems to be one step ahead of him and the bloodshed threatens not to be stopped soon...

"Odd Thomas" is based on the novel "Die Anbetung", the first book from the "Odd Thomas" series by horror specialist Dean Koontz. Stephen Sommers, known for effect heavy big productions like "Die Mumie", "Van Helsing" or "G.I. Joe" has created this adaptation with relatively small means. While he was allowed to spend well over 150 million dollars on "Van Helsing" and "G.I. Joe", "Odd Thomas" managed with only 27 million dollars. But even though some of the special effects don't meet the highest quality standards, the lower budget didn't harm the film in any way. On the contrary: instead of concentrating primarily on the visual realization and relying solely on computer effects, Sommers was able to focus a little more on the story and its characters.

Additionally, dramaturgy and character drawing have never been Sommers strengths. But especially in comparison to his last movies, which seemed to be soulless in content, "Odd Thomas" is almost a qualitative quantum leap forward. On the one hand, this is certainly due to the exciting book template, but on the other hand it is also due to the good actors that Sommers chose. Moreover, the mixture of sometimes surprisingly macabre humor, tension and horror elements is absolutely coherent and makes the movie a great pleasure despite its weaknesses. The small guest appearance of Sommers' regular actor Arnold Vosloo or a running gag about it, whereby Odd always disturbs Chief Porter with his calls, make for some very amusing moments, while the story itself takes on rather gloomy tones towards the end and can surprise with an amazingly emotional finale.

Surely "Odd Thomas" has some small weaknesses especially when it comes to dramaturgy. But as far as both the visual realization and the general entertainment value is concerned, this novel adaptation is far superior to many a work that made it into the cinemas this year. It's a shame that this really well done fantasy flick was locked up for a long time due to a lawsuit and now only gets a very small evaluation in the USA as well as internationally. Because whether we get to see more "Odd Thomas" movies like this seems rather questionable. Be that as it may: if you like exciting and entertaining fantasy flicks with some humor and small horror interludes and if you are willing to ignore minor flaws, you should not miss this home cinema premiere!

Picture + sound: There's hardly anything to complain about here. The image is absolutely clean and has a pleasant depth. The depiction of details is absolutely satisfying even in the dark scenes and the color scheme also proves to be extremely atmospheric. The sound shows that the English soundtrack is much more harmonious than the German DTS-HD MA Mix, where the dialogues sound a bit dull here and there. However, some good surround effects, which create a good dynamic, make up for this small flaw at least in places. All in all this is enough for a more than satisfied one: Gut!

Extras: As extras there is a 10-minute look behind the scenes, consisting of uncommented B-Roll recordings, as well as three detailed promo interviews with Addison Timlin (ca. 16:47 min.), Anton Yelchin (ca. 10:21 min.) and Willem Dafoe (ca. 12:39 min.). In addition, there are reading samples from the "Odd Thomas" novels "Abgrundtief" and "Die Anbetung", as well as the trailer for the film and other program tips from the provider.

Result: "Odd Thomas" is the film adaptation of the Dean Koontz novel "Worship", which Stephen Sommers has implemented in a very entertaining way. The mixture of tension, black humor and a little bit of emotionality works really well, even though the effects don't really reveal the astronomically high budget here and there and even Sommers himself can't deny his weaknesses as a director on a dramaturgical level every now and then. Nevertheless, the fantasy adventure is entertaining, extremely enjoyable and also really worth seeing thanks to the good actors, which is why there is also a clear "recommendable" for the technically very well realized Blu-ray!