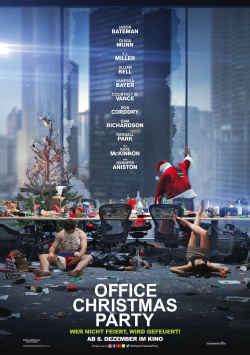 No more fun: Just before Christmas, of all times, ice-cold businesswoman Carol (Jennifer Aniston) threatens her brother Clay (T.J. Miller) to close the branch of the family business he runs unless another miracle happens and a lucrative client can be landed. But to impress the man, Clay and his two best employees, Josh (Jason Bateman) and Tracey (Olivia Munn), would have to organize a spectacular Christmas bash for the entire office - all in a matter of hours. The biggest problem with this is that Carol has categorically forbidden a Christmas party. Now Clay has to decide: does he override his sister to save the jobs of his employees or is it more important to him to get his own sheep in the dry?

Josh Gordon and Will Speck (Circumstantially in Love) deliver a comedy off the drawing board with Office Christmas Party that, despite some nice moments, hasn't become much more than another Hangover clone. This starts with the character constellation, continues with the oh-so-crazy party sequences and the inevitable penis and sex jokes, which unfortunately seem to be standard in US comedies at the moment. The film lacks any form of originality, making it not only predictable but also just plain bland for long stretches.

That this sprawling Christmas celebration nevertheless has some fun factor is primarily due to the cast. Jennifer Aniston, for instance, is just as convincing as the ice-cold bitch-in-chief as T.J. Miller (Silicon Valley) is as her potty-mouthed brother with little brains and a whole lot of heart. The ever-reliable Jason Bateman and Olivia Munn also harmonize perfectly, which is why their scenes work well despite the weak script. The rest of the ensemble is okay, but - like the story and its gags - don't stick in your mind.

One thing you definitely have to give Office Christmas Party credit for: The viewer gets here exactly the film, the title and trailer promise. If you like this kind of humor and can laugh about it even in the umpteenth rehash, you will have a lot of fun here. And for such viewers there is then also a deserved: Ho-Ho-Ho get your movie tickets! Worth seeing