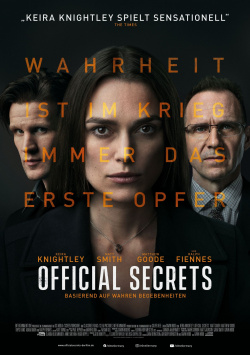 Katharine Gun (Keira Knightley) works as a translator for the British news service GCHQ. In 2003, the NSA receives a top secret memo in which it calls on the British secret service to spy on member states of the UN Security Council in order to blackmail them into approving the UN resolution on the Iraq war. Although Katharine has committed herself to absolute secrecy, she feels morally compelled to leach the document. When this explosive information is published by the journalist Martin Bright (Matt Smith) in the "Observer", the search for the whistleblower is immediately feverish. Katharine remains silent until she realizes how her colleagues are being put under more and more pressure.  She confesses, is then arrested and charged for violating the Official Secrets Act. The first episode: Her Kurdish husband Yasar (Adam Bakri) is to be deported immediately. The situation seems hopeless, but there is one last glimmer of hope when she can win the human rights lawyer Ben Emmerson (Ralph Fiennes) for her defence. But time runs Katharine away…

"Official Secrets" tells the true story of whistleblower Katharine Gun - a story that is extremely topical even after 16 years. The film poses two central questions: How far can secret services go to pursue their goals - even if this is done under the guise of protecting their own population? And when should one put one's moral duty above the law? Automatically describing whistleblowers as heroes is probably just as one-sided as labeling them as criminals from the outset. But even if one should look at the topic in a differentiated way, one must be thankful that there are people like Gun who are willing to give up their lives, their professional careers in order to bring injustices and lies to the public.

Director Gavin Hood tells the story in the best political thriller manner. Admittedly, whether it's Gun's fight with her own conscience or the fierce discussions in the editorial offices of the "Observer" that make you feel like you're on familiar ground. And also the preparation of the team around Ben Emmerson for the negotiation is rather conventionally implemented. But the story has such tension and topicality that it does not really stand out negatively. The film simply grips and inspires to think and discuss for a long time even after the credits are over. If something like this is achieved, then the staging may also be conventional.

Theatrical "Official Secrets" offers good to very good performances. The main actress, Keira Knightley, makes every effort to ensure that her play is credible and as intense as possible. Unfortunately, her facial expression only changes marginally during the whole movie. This may fit to the role, but especially in comparison to the play of some of the supporting actors it seems a little bit one-dimensional. But even this point of criticism weighs only slightly in the end, because despite its weaknesses "Official Secrets" is a strong and also important film. And that's clearly one thing: Absolutely worth seeing!