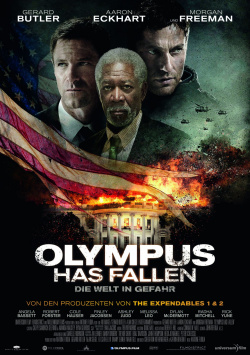 Olympus has fallen - The World in Peril

Once upon a time, Secret Service Agent Mike Banning (Gerard Butler) was one of US President Asher's (Aaron Eckhart) closest confidants. But after a tragic accident, Mike has fallen from grace and has been relegated to desk duty at the Treasury Department. Day after day, he sees his former workplace, the White House, from here, which always reminds him of his failure that one night 18 months ago. As a result, Mike's marriage to nurse Leah (Radha Mitchell) suffers as well, and seems barely salvageable. But all these problems take a back seat when the White House is attacked by a heavily armed commando of North Korean extremists. Nearly all of the security agents are killed and the president and his advisors are held hostage in the bunker. Mike manages to gain access to the White House in the chaos. There, it is now up to him alone to rout the terrorists and save the President from certain death.

With Olympus has fallen, director Antoine Fuqua (Training Day) has directed a very classic action film in the best 80's style that has become exactly the film that Die Hard 5 should have been. True, Gerard Butler's Mike Banning doesn't have the very special coolness of early John McClane. Still, in terms of style and entertainment value, Fuqua's smash is much closer to John McTiernan's 1988 classic than John Moore's fifth rehash of the Die Hard series was. To be sure, Fuqua makes use of countless clichés and seems to quote other genre entries rather than providing his own touch and a breath of fresh air. But despite one-dimensional characters and a very simple dramaturgy, the film manages to entertain the audience for almost two hours.

Thereby, of course, not the intellect, but only the pleasure center of the brain is stimulated. No matter whether it's a real crash in Washington and some famous landmarks are spectacularly reduced to rubble, or whether Mike Banning is fighting a tough duel with the terrorists, the excellently staged action quickly makes you forget the lack of originality and other weaknesses. It also helps that Rick Yune (James Bond - Die Another Day, The Fast and the Furious) is a good villain, who is also extremely clichéd, but still exudes a believable menace. In any case, Fuqua has enlisted an ensemble of actors worth seeing in the form of top-class supporting actors such as Morgan Freeman, Oscar winner Melissa Leo and Aaron Eckhart (The Dark Knight), who energetically and effectively support Gerard Butler in playing against the rather thin script.

Olympus has fallen - The World in Peril is thus neither particularly intelligent nor truly original. But Antoine Fuqua proves here very convincingly that it is possible to direct even very simply knitted action in a high-quality way. And it's not just Roland Emmerich who will have to be measured against this in the summer with his very similar White House Down. If you were bitterly disappointed by the last Die Hard movie and finally want to see a good old-school action movie again, Olympus Has Fallen is highly recommended. Not new, but not boring for a second - and that's exactly why it's absolutely worth seeing!

Cinema trailer for the movie "Olympus has fallen - The World in Peril (USA 2013)"
Loading the player ...