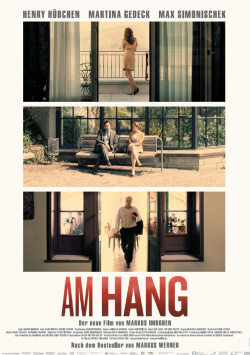 When Thomas (Max Simonischek) stops the obviously suicidal Felix (Henry Hübchen) from throwing himself in front of an approaching train, he is convinced that he has done a good deed. But the grumpy old man does not show him any gratitude. When the two men meet again a short time later by chance in the restaurant of a luxurious hotel, the musician and the younger divorce lawyer realize that there is simply chemistry between them. A long conversation begins, which quickly starts to become very familiar. Felix talks about his supposedly deceased wife and Thomas talks about the end of a passionate affair. The longer Thomas talks about his married conquest Bettina, the clearer it becomes to Felix that his counterpart is actually talking about his wife Valerie (Martina Gedeck), who left him after 15 years of marriage. But instead of confronting his adversary, he lets Thomas believe that a real male friendship is developing between them. It's the beginning of a perfidious game of confusion that heads inexorably towards a tragic conclusion.

With this film version of Markus Werner's novel Am Hang, director Markus Imboden has ventured into a very ambitious project. After all, it's not really easy to adapt the story, which consists primarily of conversations between two men, for the screen. This material works excellently as a book and is also suitable for the theatre stage, as several successful adaptations prove. But such a chamber play on the big screen? That can't actually work.

And indeed, the film has to contend with some problems in that regard. The very dialogue-driven material sometimes comes across as a bit dry in the theatrical version, the language stilted, which might make the whole thing a bit harder to access for some viewers. Still, Imboden has found ways to adapt and expand the story in such a way that it works surprisingly well as a film. For instance, he doesn't just let the dialogue carry the action. He also employs very strong imagery, infused with an underlying menace, as supporting pillars that contribute enormously to the fact that Am Hang never really becomes boring and even has a pleasant tension that is maintained until the end.

Also, the decision to give Valerie/Bettina a central role in the film, while in the book she only appears in the men's narratives, elevates Am Hang above a simple novel adaptation. Imboden has made the original his own without distorting or watering it down. And that really is a minor feat, even if the end result as a whole isn't one hundred percent convincing. Fortunately, though, the minor flaws are largely mitigated by the three very strong actors, so that the bottom line is that Am Hang is a somewhat dry drama, but one that is nonetheless very engaging.

The story about three people on the precipice of what could end in tragedy on one hand, but could also mean a new beginning on the other, is also a story about coincidences, about what we think is true love, and about the need to let go. This is strong acting cinema and an intense chamber play that can offer good and exciting entertainment to lovers of German arthouse cinema who are willing to engage with the somewhat artificial language.

Cinema trailer for the movie "On the slope (Deutschland/Schweiz 2013)"
Loading the player ...