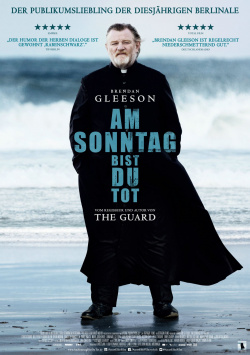 You'll be dead on Sunday

James Lavelle (Brendan Gleeson), a priest in a small Irish coastal village, has heard many incredible things during confession, after all. But even he is surprised when one day a member of his congregation opens up to him that he will kill him next Sunday. Not because James has done anything bad. On the contrary, to make a statement against the crimes committed by other priests under the protection of the church, a good priest is to die. Because he was threatened during confession, James is not allowed to turn to the police. And since he didn't realize who told him his death was imminent, he must now search his small parish for his killer-to-be. But the time he has left is flying by, and there are still a few things James wants done at all costs, should he really have to die on Sunday.

On Sunday You're Dead is the second collaboration between director John Michael McDonagh and lead actor Brendan Gleeson, following the wonderfully black comedy The Guard, and is again set on the coast of Ireland. But that's really where the parallels end. While Gleeson played a cynical loner full of prejudices in McDonagh's feature film debut, here he plays a very calm, lovable priest who still believes in the goodness of his fellow man, even though they keep convincing him otherwise. And although there are some thoroughly humorous moments, On Sunday You're Dead is primarily a depressing drama that even takes on downright depressing features towards the end.

Whoever is guided by the associations to The Guard and also expects a light comedy due to the supporting actors Chris O`Dowd (The IT Crowd) and Dylan Moran (Shaun of the Dead), who are rather subscribed to the field of comedy, will probably be bitterly disappointed and will unfortunately overlook the many strengths of the film, which are hidden behind its dreary facade. But if you don't approach the story with the wrong expectations and get involved with John Michael McDonagh's idiosyncratic storytelling style, you'll realize in the end that his second directorial effort has once again hit the spot in his own special way.

Alone the perfect composition of the fantastic images of the rugged Irish coastal landscape captured by Stanley Kubrick's cinematographer Larry Smith and the elegiac music by Patrick Cassidy is a real cinematic treat. And the acting of the excellent ensemble, led by a wonderfully restrained Brendan Gleeson, also makes for great cinema. The story itself is told in a rather unagitated manner, with an unexpected profundity revealing itself behind the leisurely staging, through which the ending in particular is given a special sustainability.

Surely, the material would also have lent itself very well to being told as a bitterly wicked comedy. That's already made clear by the moments when McDonagh gives his audience a few laughs. But upon further reflection, it becomes clear that the decision to go for a more serious tone was absolutely right, even if it means that a much smaller target audience is addressed than with The Guard. John Michael McDonagh has made a very unusual, yet also stirring film about guilt and atonement, which exposes the seemingly idyllic village community as a mere facade and thus lets the viewer look into all too human abysses. This is exciting, stirring, sad, but also amusing and wicked. A pleasantly inappropriate film, which should not be missed especially by lovers of slightly weirder program cinema fare. Absolutely worth seeing

Cinema trailer for the movie "You'll be dead on Sunday (Irland 2014)"
Loading the player ...