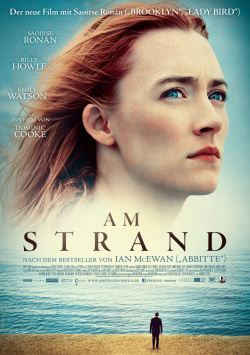 When Florence (Saoirse Ronan) and Edward (Billy Howle) meet in the early 1960s, it is pure passion from the first moment. Although Florence's parents are not at all pleased to see their daughter consorting with a young man from a humble background, the love between the two cannot be stopped. And so it comes, as it must come: Florence and Edward walk down the aisle together. And as husband and wife they can finally give free rein to their passion on their wedding night. But it soon becomes apparent that there is something else standing between the couple and a fulfilling love life - something that will severely test this young marriage on the very first night.

On the Beach is the second film adaptation of a novel by Ian McEwan, starring Saoirse Ronan. She was nominated for an Oscar in 2007 for her performance in the best-selling adaptation, Abbitte. While she would have deserved that honor here as well. However, the film never manages to match the emotional power of Abbitte. And that's despite the fact that the final act is quite heartfelt. But Dominic Cooke's production, which is a bit too worn, prevents the emotions from adequately unfolding, despite the strong cast and moving story.

The bulk of the film tells of the first wedding night, interspersed with flashbacks showing how the young couple met and fell in love. It seems like a normal love story. But the closer the two get to their first time, the more repressed fears and dark shadows from the past reveal themselves. And suddenly the beautiful romance turns into a bitter drama, followed by a truly sad and beautiful epilogue.

Saoirse Ronan and Billy Howle play the couple so convincingly that you really believe their love is real. And that's hugely important for the ending to work. There's a huge spark between them, which makes the dramatic twist in their story all the more tragic. The harmonious interplay between the two strong main actors alone makes Am Strand absolutely worth watching. Only the somewhat brittle staging stands in the way of an all-round successful overall impression. If you like quiet, typically British romantic dramas, you can definitely risk a look here, despite some point deductions in the B grade. Worth seeing

Cinema trailer for the movie "On the Beach (Großbritannien 2017)"
Loading the player ...