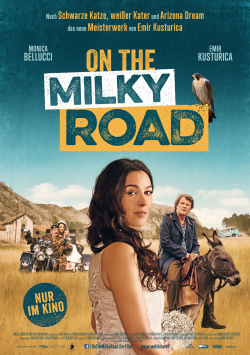 On the Milky Road

In the civil war of the former Yugoslavia, milkman Kosta (Emir Kusturica) rides along the front line day after day, delivering his milk completely unfazed by the hail of bullets flying around his ears. For the beautiful Milena (Sloboda Micalovic), Kosta is the perfect husband - and as soon as her brother Zaga (Predrag Manojlovic) returns from the war, she wants to get down to business. The whole thing is about to become a double wedding, as Zaga is to marry a mysterious Italian woman (Monica Bellucci) who is hiding out with Milena and her mother. It's just too bad that Kosta falls in love with Zaga's bride and she also seems to have great interest in the milkman. But when the Italian's powerful ex-lover finds out where she's hiding, the secret feelings between her and Kosta are the least of her problems.

On the Milky Road by Emir Kusturica is a difficult film. Apart from its political stance, which makes it hard to look at this film detached from it, another fact sours a lot. For example, in many scenes a humorous, in places even overly silly tone prevails. This is then suddenly replaced by an unbelievable cruelty, which may be realistic, but which seems completely out of place in the context of the production, especially since shortly thereafter again calmer, fairy tale or just humorous tones are struck.

On a purely visual level, the film is fascinating. No question, Kusturica has created some quite wonderful moments, which in themselves offer quite great cinema. But again, the interplay of images, story and the drastically shifting tone never quite wants to work. Of course, an incredible amount could be interpreted into many of the images. But that's exactly where the problem lies. Because if you start with that, then you also have to include Kusturica's nationalist sentiments and his support of the alleged war criminal Radovan Karadžić in the interpretation. And then some aspects of the story do poke a bit sour.

However, if you separate the artist from the political persona, then the aspects that don't quite harmonize come into play. Whichever way you turn it, it is and remains difficult to take a clear position on this film. Lovers of visually playful arthouse fare, which may be sometimes overdone and then again tremendously brutal, will On the Milky Road but certainly enough positive sides to be able to attest this film a worth seeing.

Cinema trailer for the movie "On the Milky Road (Serbien/USA/Großbritannien 2016)"
Loading the player ...