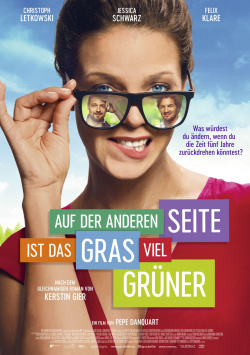 The grass is much greener on the other side

For Kati (Jessica Schwarz) and Felix (Felix Klare) it was love at first sight when they met five years ago. Since then they lead a very happy relationship. But in the meantime Felix puts more passion into his job as a doctor than into his marriage. She only realizes how much this is hurting Kati when she meets the young artist Mathias (Christoph Letkowski) and falls head over heels in love with him. And suddenly Kati completely questions her relationship with Felix. Until now, she was convinced that he was the man she wanted to grow old with. But is that really the case? Even before she can find an answer to that question, fate intervenes and Kati finds herself back on the day she met her future husband five years ago. Now she has a second chance at true happiness. But who can she find it with? With Mathias or with her Felix?

With this film adaptation of Kerstin Gier's novel Auf der anderen Seite ist das Gras viel grüner, director Pepe Danquart tries his hand at a romantic comedy of the more over-the-top kind. The story, though not exactly new, is nevertheless very charming. And as a viewer, you actually find yourself asking: what would I do if I could relive the last five years? The realization of the story is actually amusing in some moments and manages here and there to touch the heart of the inclined audience. Beautifully captured images on locations in Frankfurt, Wiesbaden or Offenbach ensure that the film can score on a purely visual level. And at least on paper the cast also sounds promising, the ensemble are all likeable and talented actors and actresses.

But there is unfortunately a very big but. And that's a real shame, because you can tell that the cast had a lot of fun here, and overall a lot of passion went into the project. Still, too many scenes just don't work, are staged way too over-the-top, use little subtle sledgehammer slapstick or are just exhausting. The latter is especially the case with Kati's best friends Linda and Marlene. These are actually two charming characters in their somewhat quirky way. But script and production make them extreme tests for the nerves of the audience, which even the good actresses can't save. The romance also suffers from the overdone slapstick and can therefore rarely unfold the emotional impact that is actually inherent in the story at its core.

So On the Other Side, the Grass is Much Greener is one thing above all: extremely frustrating. That's because you realize that a lot was done right here - or should have been done - but that the aspects that went wrong weigh so heavily that it significantly dulls the enjoyment of this romance. As an old romantic, I wanted to like this movie so much. Especially since I'm always happy to see Frankfurt show off so nicely in movies. And I always enjoy watching Jessica Schwarz, Elena Uhlig and Christoph Letkowski in particular. But here was so often Fremdschämen and annoyed eye-rolling announced that I can give here with the best will only a conditionally worth seeing.

Cinema trailer for the movie "The grass is much greener on the other side (Deutschland 2016)"
Loading the player ...