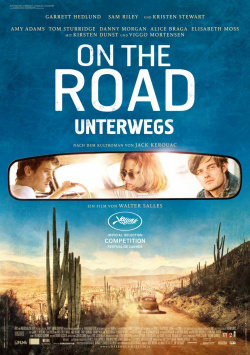 On the Road, the cult novel by Jack Kerouac that became a manifesto for the Beat generation, was long considered unfilmable. Director Walter Salles (The Journey of Young Che) has set about the difficult task of adequately translating Kerouac's words, which expressed and shaped the attitude to life of an entire generation, into a film language all his own. Even if it is doubtful that his film will have a similar impact as the book, the filmmaker can be credited with an overall successful adaptation.

On the Road tells the story of the young up-and-coming writer Sal Paradise (Sam Riley), who falls into a deep creative crisis after the death of his father. During this time he meets the charismatic Dean Moriarty (Garrett Hedlund), who exerts an extreme fascination on Sal and thus pulls him out of his lethargy. Together, the two set off on a journey west, a journey marked by drugs, sex, jazz and the endless expanse of their own minds. And each day Sal spends on this journey with Dean and the other companions such as Dean's great love Marylou (Kristen Stewart), his young wife Camille (Kirsten Dunst) or the eccentric Old Bull Lee (Viggo Mortensen), brings him closer to a goal that slowly manifests itself before his eyes....

As difficult as it was to adapt the book for a movie version, it is even more difficult to summarize its content in a few short sentences. This is because the story and message of the film are very complex, emerging from the interplay of images and text and what is written between the lines. To decipher this, however, requires a certain prior knowledge of the social, political and artistic background of the Beat Generation, which could prove to be a problem, especially with a younger audience. For if one fails to recognize in the story, in Sal's off-comments, or even in the music, the expression of a very particular attitude to life, large parts of the film could be regarded as inconsequential and downright boring.

This, however, is primarily due to the complexity and significance of the novel. For in itself, Walter Salles has directed a very good film, scoring points with strong actors, great visuals and a convincing ensemble of performers. But as good as Sam Riley (Control), Garrett Hedlund (Tron: Legacy) and even Kristen Stewart, who is often chided for her limited mimicry, play, the characters remain rather unwieldy and emotionally inaccessible. The fact that this is in a way intentional and important for the story doesn't change the fact that the film can't build much of a bond with the audience due to the emotionally crippled characters. This may succeed if one is familiar with the book and the time in which it was written. But if you're simply trying to engage with the film with a completely open mind, the callousness that emanates from some of the characters on the surface could make that endeavor extremely difficult.

On the Road - On the Road is very well-crafted cinema that is visually and acting-wise beyond reproach. But for all its strengths, it ends up feeling kind of inconsequential, and there are only isolated glimpses of the impact and meaning that the book is said to have. No question, there are quite great moments, such as the appearance of Viggo Mortensen, and scenes that are extremely moving in their simplicity. But it lacks that certain something with which the film can leave a lasting impression. Therefore, if you know and love the book, you should definitely watch the movie, if only to see if the book is indeed unfilmable. Otherwise, too, a worth seeing can be pronounced, but only for lovers of American arthouse dramas who can get involved with somewhat bulky and lengthy fare.

Cinema trailer for the movie "On the Road (USA/Großbritannien/Frankreich 2012)"
Loading the player ...