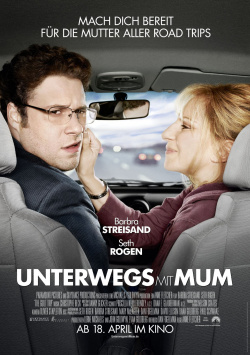 On the Road with Mum

After the huge success of Self is the Bride, director Anne Fletcher now returns with another comedy, for which she was able to win Barbra Streisand in her first leading cinema role since 1996. Aside from two small appearances in two of the Focker films with Ben Stiller and Robert De Niro, Barbra Streisand has made herself very scarce on the big screen over the past fifteen years. Now, as the energetic uber-mom, she proves that she hasn't lost her comedic touch even after all these years.

In On the Road with Mum, the two-time Oscar winner plays the overprotective Joyce, who cares about nothing more than the well-being of her son Andy (Seth Rogen). He's been trying unsuccessfully for some time now to sell an organic cleaning product he invented. For this he travels across the country, but so far without the desired success. The next leg of the journey should finally bring the longed-for turnaround, however, as Andy has been able to organise some promising appointments. When Joyce tells her son about her first great love and Andy finds out where this mysterious man lives, he plans to organize a surprise reunion between the two. To this end, he invites his mother to accompany him on his business trip - an invitation he regrets after only a few miles. Because whether with raunchy audio books or with her noisy midnight snack, Joyce hardly misses an opportunity to get on Andy's nerves. But it soon transpires that this whirlwind road trip has some real surprises in store for both of them.

There are no real surprises for the viewer, however. On the Road with Mum is a well-behaved Hollywood comedy from the drawing board, enriching well-worn gags and hackneyed clichés with very few genuinely original moments. If you're familiar with road trip comedies like A Ticket for Two or Deadline, you'll find a lot of scenes in On the Road with Mum somehow familiar. This lack of originality then also prevents the film from being remembered in the long run. The whole thing is nice, quite funny and doesn't hurt anyone, but also quickly falls into oblivion.

The only thing that makes the comedy really worth seeing is the amusing interplay between Barbra Streisand and Seth Rogen. While Rogen is restrained in a very charming way, Streisand makes for some very funny scenes as a somewhat overprotective mommy with an absolute knack for putting her foot in her mouth. The fact that Fletcher largely avoids the fecal humor so popular in U.S. comedies at the moment and rather uses something in the best sense of old-fashioned comedy, brings the mother-son story additional sympathy points. And what in the first minutes still runs the risk to get on the viewer's nerves quickly, becomes in the end a very entertaining and amusing cinema pleasure.

Who does not particularly attach much importance to originality and just wants to see a harmless, nice family comedy of the typical American kind, can confidently sit in the car with Joyce and Andy and accompany them on their chaotic road trip. Not a big hit, but nice entertainment - and for that there is also a satisfied: Worth seeing!