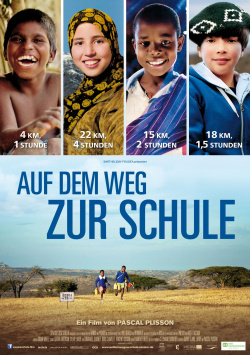 On the way to school

All parents should know this: If you have finally managed to get your offspring out of bed with a lot of effort, repeated admonitions or even some cold water, this is followed by minute-long orgies of whining that school is so stupid and that you could spend your time with so many nicer things. And the way to school is sooooo long. 15 minutes on the train. The pure horror. And maybe as an adult you find yourself thinking exactly the same way in the past. But what is a torture for many children in our society is a real privilege for children in other countries. A privilege for which they are prepared to go to enormous lengths day after day in order to be allowed to learn something. In his dramaturgically prepared documentary film On the Way to School, director Pascal Plisson introduces some such children and accompanies them on their strenuous, long and sometimes even dangerous journey to school.

There is eleven-year-old Jackson from Kenya, for example, who first has to dig a water hole in order to be able to wash his school uniform and to get drinking water for the long journey he has to make through the savannah with his little sister Salome. Or 12-year-old Zahira, who only comes home for the weekend and has to make the 22-kilometre trek through the Atlas Mountains every Monday to get to class on time. A full 18 kilometres are covered by 11-year-old Carlito and his sister Mica every day in the Argentine Patagonia, with loose scree making the journey not exactly easy or safe for the horse that carries them. And finally, there is 13-year-old Samuel from India, who is in a wheelchair and has to be pushed four kilometres through rough terrain every day by his brothers Emmanuel and Gabriel. These are strenuous paths full of hardships that these children have to put up with. But they are all united by the iron will to master this challenge again and again, in order to get the education that can one day give them a better life.

When you see what the young protagonists of On the Way to School have to master day after day, not only for their school education, but more generally in their lives, then it puts some of the things we like to complain about in this country in a different light. How often do we roll our eyes in annoyance when the subway is five minutes late in the morning or when it rains even a few drops? But it becomes particularly clear here what a valuable commodity education is and that it must also be made clear to the children here that access to school education is not a matter of course. Certainly there is room for improvement in our school system and curricula. And also not only many pupils, but also teachers and parents would have to change something in their attitude, so that such an awareness can develop at all. This film will not change that. But if it makes a difference to even a few, then it has definitely achieved its goal.

So much for the idealistic aspects of the film. From a purely technical standpoint, On the Way to School is, unfortunately, not so commendable. The decision to present the action in a distinctly post-staged fashion rather than in a truly documentary fashion definitely takes away some of the power of the whole thing. The fact that everything bad happens to the children here on their way, which in reality might happen over the course of several months or years, just seems a bit exaggerated and also not one hundred percent believable. And yet, the film wouldn't have needed such a dramatization at all. Because when the children are allowed to tell in their own words what school means to them, what their dreams and wishes are, then it becomes clear that there would have been enough material for a really exciting, unadulterated documentary.

So the whole thing seems too contrived, a bit wooden and in the long run also a little bit boring. That doesn't change the fact that this is a good and important film. But in the end the feeling remains that the film could have been much more powerful and therefore more effective with less staging and more authenticity. Nevertheless, there is a clear bottom line just for petulant schoolchildren: Worth seeing!

Cinema trailer for the movie "On the way to school (Frankreich 2013)"
Loading the player ...