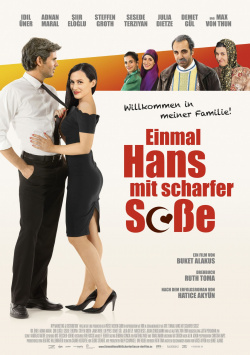 Once Hans with Hot Sauce

Hatice (Idil Üner) actually leads a very independent life as an ambitious journalist in the big city. If only it weren't for the Anatolian village that keeps speaking up in the back of her mind, reminding her of her family's traditions. Traditions that her father Ismail (Adnan Maral), in particular, attaches great importance to upholding. And so it is out of the question for him that his youngest daughter Fatma (Sesede Terziyan) should be allowed to marry before Hatice. It's just too bad that Fatma is pregnant and can't be kept a secret much longer. So Hatice has to present her family with a son-in-law very quickly in order to save her little sister from shame and disgrace. But that is easier said than done. Because Hatice does not want a Turk at all. But it shouldn't be a typical German man either. She is looking for a mixture of both, a Hans with hot sauce. But how is she supposed to find such a man, who meets her expectations and is approved by her father, in such a short time?

The biographical novel Einmal Hans mit scharfer Soße by the German-Turkish journalist and writer Hatice Akyün was so popular that the book was followed by two sequels. With a great deal of irony, Akyün illuminates her German-Turkish life in her books, highlighting topics such as integration, traditions and xenophobia, as she does in her other works. She has also shown that these issues are very close to her heart by repeatedly speaking out in heated debates about migration, and was awarded the Berlin Integration Prize in 2011.

It is a shame that not much of Akyün's commitment and good intentions have been left in the film adaptation of her book. Despite a very charismatic leading actress and some nice ideas, the adaptation by director Buket Alakus (Another League) is unfortunately nothing more than a shallow multi-culti comedy, which instead of biting irony or playing with prejudices in a cryptic way rather relies on worn-out stereotypes and clumsy clichés. This might still be funny and even kind of charming in the first minutes. You can also tell that everyone involved has their heart in the right place and has really good ambitions. But overall, the implementation simply does not work, because it lacks any form of bite and profundity in addition to a sophisticated story.

This has the consequence that the action at some point just plods along tiredly and the plot seems to constantly turn in circles. For nice TV entertainment, as this co-production with NDR and Arte is obviously designed, this may still be enough. But for a visit to the cinema, the comedy simply offers too little to justify the price of admission. Charismatic actors and a few good laughs are simply not enough. In the interview in the film's press booklet, Buket Alakus explains that she was so taken with the novel because Akyün paints a picture of a modern German-Turkish woman and has used a lot of humour and irony to create an important book for second- and third-generation German-Turkish women. But in order to achieve this with the film version, Einmal Hans mit scharfer Soße would have had to be much more unconventional, biting and detached from the usual clichés. As it is, the film is just a light comedy that, like Hans in the title, lacks hot sauce and has no sustainability whatsoever. And for that there is only one: Conditionally worth seeing

Cinema trailer for the movie "Once Hans with Hot Sauce (Deutschland 2013)"
Loading the player ...