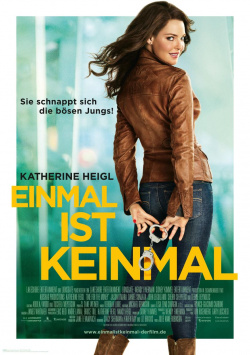 Once is not once

After what feels like ten thousand romantic comedies that always follow the same pattern, Katherine Heigl tries a humorous material of a different kind with Once is not once. Although the romantic sparks fly here again, the film adaptation of the first volume of Janet Evanovich's popular novel series about the bounty hunter Stephanie Plum also offers a large portion of thriller. And so Heigl may not only fight with the weapons of a woman, but also pull out a real gun.

Actually, the life of Stephanie Plum (Heigl) could be perfect. After all, the young woman is brimming with self-confidence, is attractive and ambitious. Too bad that she is also chronically broke and she now had to part with her car. So a job is urgently needed that will quickly bring Stephanie a lot of money. It's a good thing that her cousin Vinnie (Patrick Fischler) is in desperate need of help in his bail bond office. But is Stephanie really the right person to catch bail jumpers and turn them in to the police? She herself is deeply convinced that she is. But it doesn't take long for her to put her foot in her mouth. But when a particularly lucrative case presents itself in the form of police officer Joe Morelli, who is alleged to have committed a murder, Stephanie jumps at the chance. She has a private score to settle with Joe that she's been wanting to settle for years. And pocketing $50,000 in commission for it would be just about perfect. Too bad that the charming Joe also has something to say about it...

Once is not a bad movie. There are some very good gags, Katherine Heigl again sparkles with charm and the chemistry between her and Jason O`Mara, known from the TV series Terra Nova, makes the screen crackle many a time. And although so much works, the end result seems a bit trivial and too superficial. Director Julie Anne Robinson, who most recently directed the Nicholas Sparks adaptation With You by My Side, always seems to hit the brakes just when the action is starting to pick up steam. There is one scene where there is something like black humour, and it is here that it becomes clear how entertaining the whole thing could have been if the staging had been a little less slick and well-behaved.

When Debbie Reynolds turns up as Grandma Mazur, or Stephanie's parents make an uptight attempt to set up their single daughter, a little of the comedic potential that is definitely there is also revealed. But that's just not enough to give the crime comedy the bite that would have allowed Once Is Never to rise above the surface and become great cinematic fun. As it is, however, the best-selling film adaptation is more cramped than funny, more trying than successful, and more staid than titillating. If you're not looking for more than harmless off-the-shelf entertainment, you'll certainly be well-served by the good-humored actors and a few good laughs. But if you're hoping for a little more substance and original wit, you're guaranteed to be bitterly disappointed. Therefore: only for true Katherine Heigl fans and lovers of shallow crime comedies definitely still worth seeing!