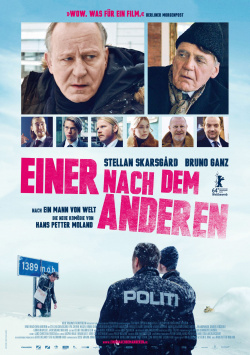 One at a Time

Snowplow Driver Nils Dickman (Stellan Skarsg&aring;rd) is a man you can count on. The residents of a small village in the Norwegian countryside, who have just voted the quiet family man Citizen of the Year, know this too. But the days of Nils always responsibly following the rules are abruptly over when his son is killed by the henchmen of a ruthless drug lord called The Count (P&aring;l Sverre Hagen). Nils seeks revenge and he sets out to find the man responsible for his son's death. In doing so, he sparks a drug war between the Count and the rival Serbian mafia, led by Papa (Bruno Ganz). And soon the snow that Nils has so carefully cleared out of the way so far turns blood red.

Also the latest collaboration between Norwegian director Hans Petter Moland and internationally successful actor Stellan Skarsg&aring;rd, like A Man of the World, has once again become a bitterly wicked black comedy with that very special Scandinavian touch. One by One not only offers plenty of bizarre deaths, over-the-top brutality and quirky characters. At the same time, the story is also filled with a depressing dreariness that makes the good-natured snowplow driver's quest for revenge somewhat understandable. The result is a somewhat curious blend of comedy and drama, the idiosyncratic style of which you have to be able to get into.

Thereby, you shouldn't just have a penchant for the macabre. Because when Nils in his justice mania really gets going, it's not exactly squeamish to the point - but just sometimes so overdone hefty that it's funny again. You should also have a soft spot for the Nordic style of storytelling, which is often described as laconic, as it can be very leisurely and also very dark. If these prerequisites are met, One by One proves to be an extremely original and wonderfully unadjusted gangster farce, which can inspire not only with a good script and great actors, but also with an extremely atmospheric visual language.

Hans Petter Moland has succeeded in creating a somewhat different contribution to the topic of coping with grief and vigilante justice, which, despite many humorous moments, still has enough dramaturgical depth to never just seem flat or striking. So if you appreciate wicked arthouse comedies and want to know what you can do with a snowplow, you should definitely not miss One by One. Absolutely worth seeing

Cinema trailer for the movie "One at a Time (Norwegen/Schweden/Dänemark 2014)"
Loading the player ...